Layoffs in these industries may be down to record lows

Stacker asked an economist why layoffs are at record lows, according to data from the Bureau of Labor Statistics' Job Openings and Labor Turnover Survey. 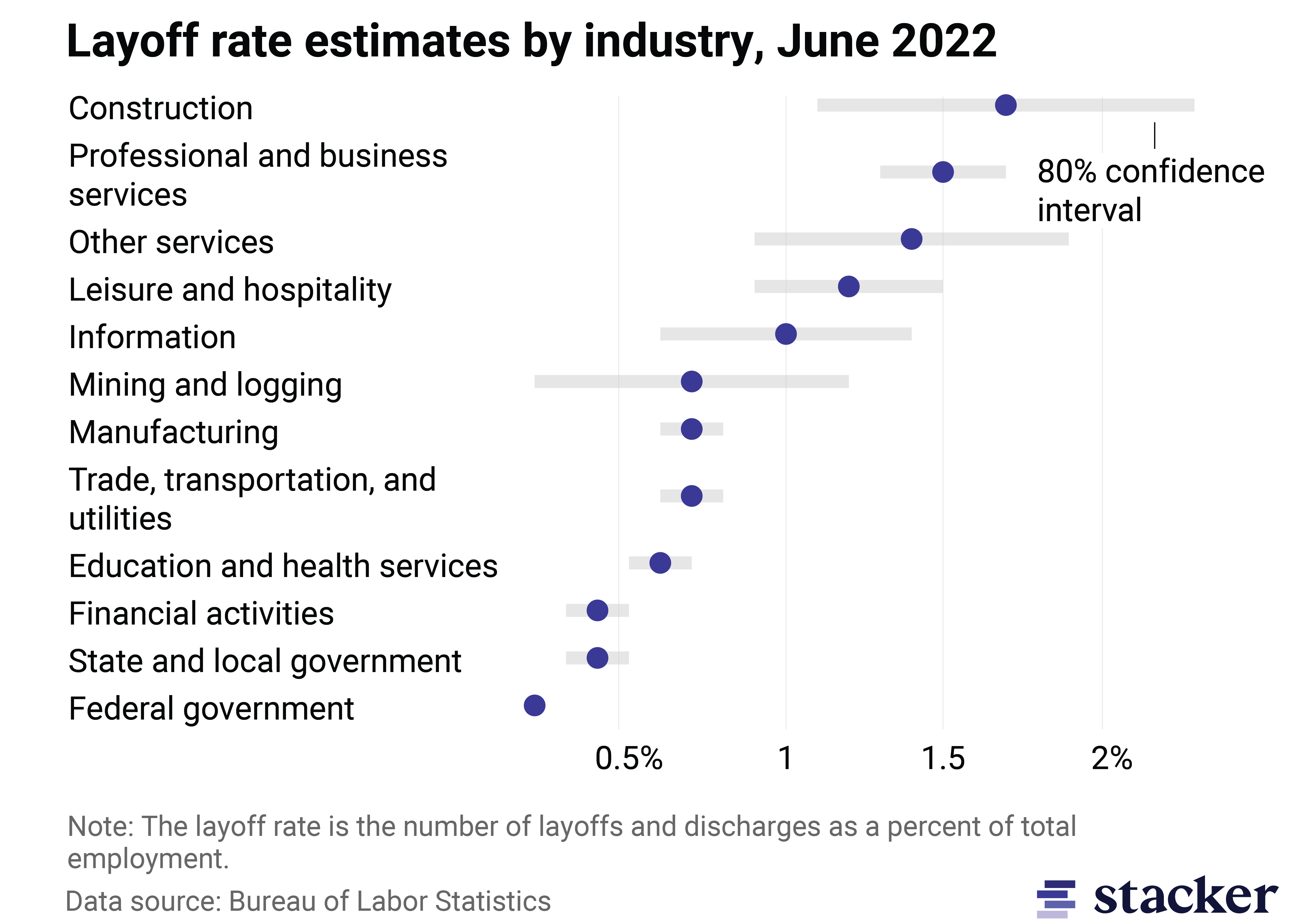 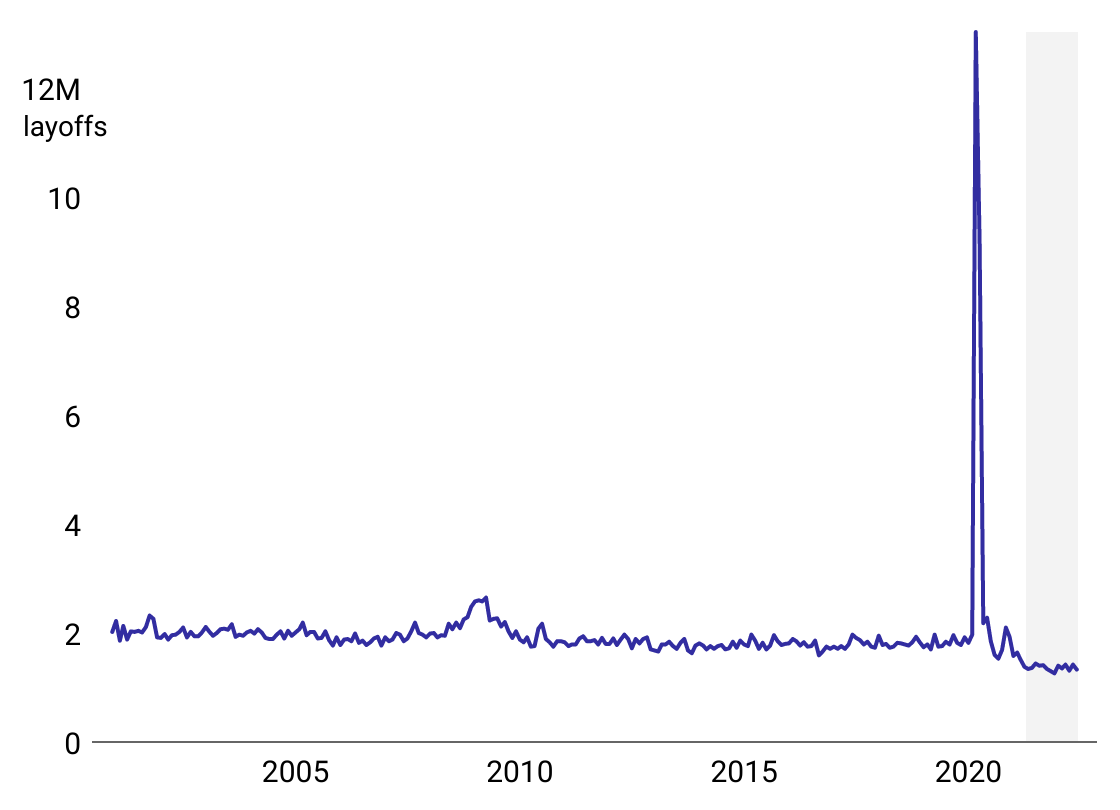 Even though layoffs and furloughs made a major impact in 2020 due to the COVID-19 pandemic, layoffs are now at the lowest level since data collection began in December 2000.

Stacker analyzed Job Openings and Labor Turnover Survey data from the Bureau of Labor Statistics to analyze recent layoff trends nationwide and in various industries. JOLTS samples data to create estimates on the broader economy, meaning there's variability in the data, which Stacker factored into its calculations. Stacker's analysis looks at seasonally adjusted data. The data includes layoffs and discharges, which BLS defines as firings, layoffs due to downsizing, closings, or positions being eliminated, as well as terminations of seasonal employees.

Additionally, Stacker spoke with Elise Gould, Senior Economist at the Economic Policy Institute, to get more insights into the economy. She helped provide information as to why layoffs are now at record lows.

After peaking at 13 million layoffs in March 2020, layoffs dropped drastically over the next few months. The figure has remained under 1.5 million for all of 2022 and most of 2021. To find out more about the monthly discharges and layoffs, layoff rates by industry, and additional labor market information about various industries, keep reading.

You may also like: States where food stamps are used the most

Layoffs are at their lowest since at least 2000 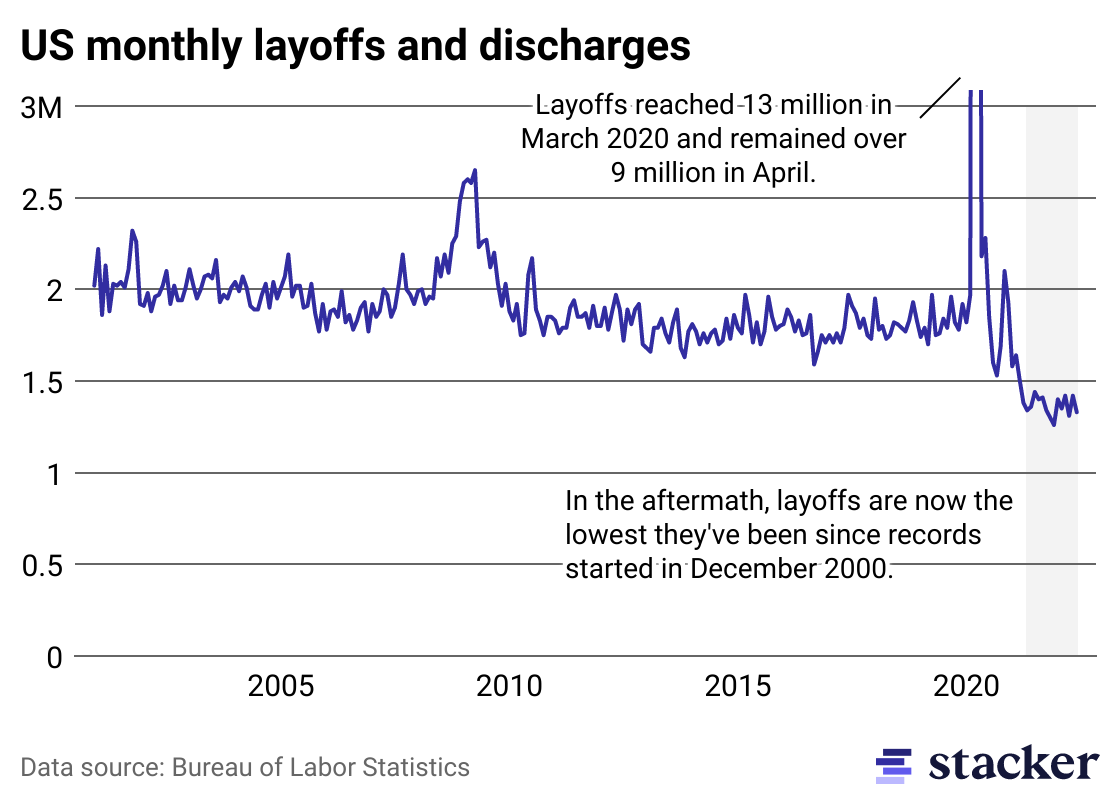 The difference between pandemic-level layoffs and current layoffs is significant. In March 2020, U.S. monthly discharges and layoffs reached a high of 13 million. This number continued to be high in April 2020, when it remained greater than 9 million. However, in the aftermath of the pandemic, discharges and layoffs are now at record lows. Layoffs are now lower than 1.5 million—the lowest they have been since BLS began gathering layoff records back in December 2000.

According to the EPI's Elise Gould, because of the high layoffs during the pandemic, employers have "been trying to build back this entire time." As a result, now that they have employees again, employers want to hold on to them, refraining from additional layoffs to "hedge their bets to not have churn again, which is so costly." Gould also added that, "Separations come in lots of ways, and [layoffs] is one way. Quits are higher for almost all of these, probably. And for context, the hiring rate is even higher."

Layoff rate estimates for June 2022 by industry range from less than 0.5% in financial activities and state and local governments, to 1.7% in construction. Gould said, when comparing the data to data from a year ago, that there hasn't been "much change in the last year in terms of layoffs. There might be a mild increase in some [occupations]." There is also quite a lot of overlap with different industries. For both state and local government and financial activities, for example, the layoff rates estimate is the same, at 0.4%. Historically, public administration and finance have retained the lowest layoff rate spot.

In recent months, layoff rates in a few industries are likely at record lows since at least 2000, when the data began: Trade/transportation/utilities, leisure/hospitality, and construction. There has been a noticeable increase in warehousing and transportation employment. This is due to the popularity of e-commerce, which has caused pronounced demand spikes for workers in the parcel and warehousing sectors across the U.S. As for leisure and hospitality, this industry is still behind pre-pandemic levels when it comes to employment. However, demand for travel and vacations could help in driving job growth overall in the next few months.

In the construction industry, many employers are struggling with retention. Some causes for this include challenges when it comes to cultural recruitment efforts, job sites being long commutes from where workers live, and difficulties providing workers with steady, good-paying work that helps them in building a career.

Milk that doesn’t have to be refrigerated? How does that work?

Top Tips to Brew up a Fun, Festive and Safe Halloween for Pets and Pet Parents