Blossoms improve to 3-5 in GAC with two consecutive wins 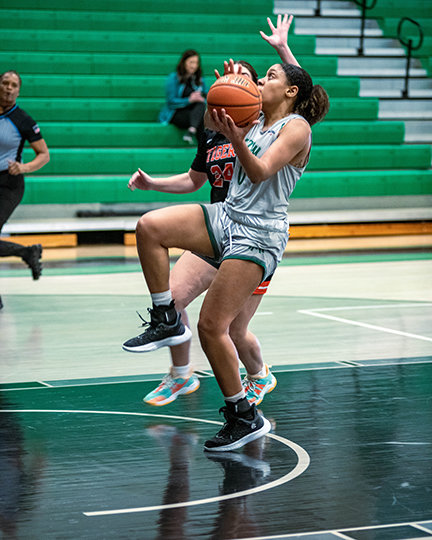 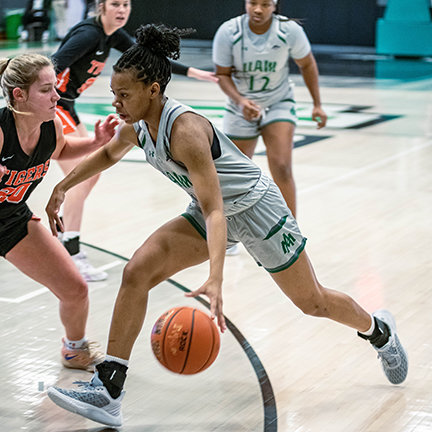 BAILEY HARRIS led the Blossoms in each of the Blossoms victories this past week. Harris scored 23 points against Southeastern Oklahoma and 21 against East Central.
Jeff Young
Previous Next
Posted Wednesday, January 18, 2023 1:00 pm
Jeff Young

Southeastern would begin the contest by going on a 9-0 run before UAM’s Cyarah Kensmil put the Blossoms on the board on a layup.

Uam would tie the contest at 9, after going on a 9-0 run on their own, with 2:50 remaining in the first quarter.

Each team would hold the lead before the end of the quarter with Southeastern taking a three-point advantage, 19-16, at the buzzer.

Southeastern would extend their lead to six points with 7:22 remaining in the half.

Uam would battle back to cut the deficit, and take a two-point lead to hold a 32-30 lead on a Taylor East jumper to end the half.

The Blossoms would continue to lead throughout the third quarter, extending the lead to the largest of the contest to that point with an 11-point, 50-39, advantage with 3:44 remaining in the quarter on a three-pointer by Azaria Hulbert.

Southeastern would cut the deficit to seven points on a pair of free throws with UAM taking a 50-43 lead into the fourth quarter.

In the fourth quarter, the Blossoms would extend their lead to the largest of the contest, with a 13-point, 67-54, lead with 1:09 remaining in the contest.

Bailey Harris led the Blossoms in scoring with 23 points followed by Cyarah Kensmil with 14.

Azaria Hulbert and Shea Goodwin each scored three points with Taylor East rounding out the scoring with two points.

Returning to Steelman Fieldhouse on Saturday, January 14, hosting East Central University, with the Lady Tigers scoring the first point of the quarter to open the contest shooting a technical foul before the opening tip.

The Blossoms would score the first points after the tip to begin the contest and would lead for the rest of the quarter with their biggest lead being five points with 2:50 remaining in the quarter.

East Central would score the final three points of the quarter to cut the UAM lead to two points, 11-9.

The Blossoms continued to lead throughout the second quarter, holding a 14-point lead twice in the quarter including a 35-21 lead to end the half.

The Blossoms continued to control the contest in the third quarter, extending the lead to 20 points, taking a 58-38 lead into the fourth quarter.

The Blossoms continued to hold a double-digit lead throughout the fourth quarter with the largest lead of the contest being 23 points coming with 1:20 left in the contest before closing the game with a 20-point, 73-53, victory.

With the wins, the Blossoms improve to 6-8 overall and 3-5 in GAC play.

The Weevils will follow the Blossoms in each game.