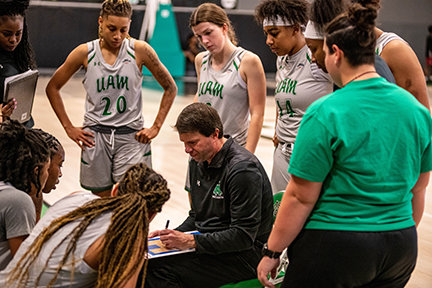 Blossoms Head Coach DAVID MIDLICK gives his team instructions before heading into the overtime period against Henderson State on Saturday. The Blossoms would lose the contest 75-70 to the Lady Reddies to fall to 0-2 in Great American Conference play losing their first GAC contest on Thursday in Russellville to Arkansas Tech 75-63.
Jeff Young
Posted Wednesday, December 7, 2022 6:00 am
Jeff Young

The University of Arkansas at Monticello Cotton Blossoms began Great American Conference play this week, first travelling to Russellville to face the Golden Suns of Arkansas Tech on Thursday, December 1.

The Blossoms would chip away at the lead to end the quarter trailing by six points, 23-17.

Arkansas Tech would lead back to double-digits for the majority of the second quarter to take a 11 point, 35-24, lead at the half.

The Golden Suns would continue to lead by double-digits throughout the third quarter, ending the quarter with their biggest lead of the contest to this point of 21 points for a 59-38 lead heading into the fourth quarter.

The Blossoms would chip away at the Arkansas Tech lead in the fourth quarter, cutting the advantage to six points, 69-63, after a pair of free throws by Bailey Harris, however the Golden Suns would score the six points of the contest to take the 75-63 victory.

Leading the way for the Blossoms was Alindsey Long with 20 points, connecting on 6 of 10 from beyond the three-point arc. Joi Montigomery and Nyah Banks also scored in double-digits for the Blossoms with 10 points each.

The Blossoms would return to Steelman Fieldhouse on Saturday, December 3, for their first home GAC contest of the season, hosting the Henderson State Lady Reddies.

The Blossoms would hold the lead in the first quarter of the contest for the majority of the time period with their largest lead being nine points on two separate occasions in the quarter.

The Blossoms would hold their lead throughout the second quarter, increasing the lead to 15 points with 4:12 remaining in the half.

Henderson would cut the lead to eight points before the conclusion of the quarter with the Blossoms taking a 34-26 advantage into the halftime break.

The third quarter did not fare well for the Blossoms as Henderson’s Bobbi Bazzle would connect on a layup that would spark an 11-0 run to give the Lady Reddies a 50-49 lead., the first Henderson lead since the first quarter.

After exchanging the lead, the Blossoms would hold a one point, 54-53, lead heading into the fourth quarter.

In the fourth, Henderson would hold a three-point lead after connecting in a pair of technical foul shots with 1:03 remaining in the contest.

Joi Montigomery would get a layup and foul to tie the contest at 67 as regulation ended to send the game to overtime.

In the overtime period, Henderson would take the lead for good with 2:51 remaining and would go on to seal the 75-50 win.

Joi Montgomery led the Blossoms with 20 points followed by Alindsey Long and Bailey Harris with 11, and Aeryn Hawkins with 10.

With the loss, the Blossoms fall to 2-5 on the season after dropping three straight, and are currently 0-2 in Great American Conference play.