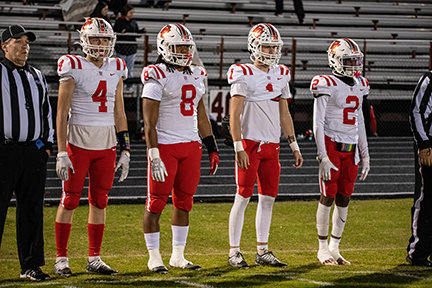 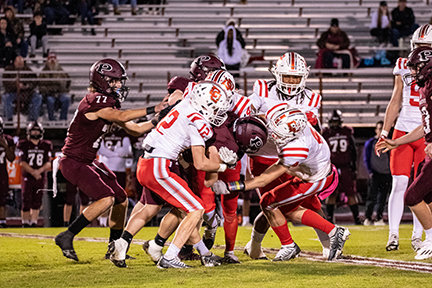 LUKE PHILLIPS and HUNTER PHILLIPS combine for a tackle against the Prescott runner. The Phillips brothers were two of the leading defensive players for the Pirates this season.
Jeff Young 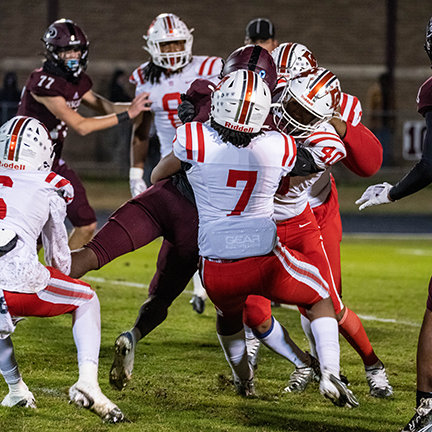 KALANI COLLINS and GABE BUTCHER tackle the Prescott runner Friday night. Butcher handled the majority of kick returns for the Pirates Friday with Collins being a go to from the running back position.
Jeff Young 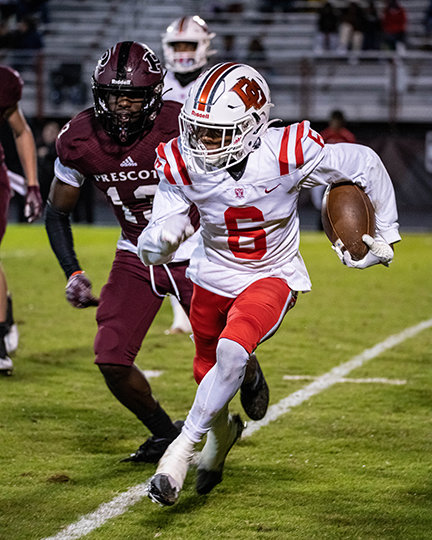 JA’CORRIAN LOVE attempts to get to the outside on one of his runs on Friday night
Jeff Young
Previous Next
Posted Wednesday, November 16, 2022 10:15 am
Jeff Young

The Drew Central Pirates 2022 Football Season came to an end Friday night in the first round of the 3A State Football Championship Tournament.

The Pirates advanced to the playoffs for the first time since the 2020 season after having to forfeit the contest hours before kickoff at Prescott.

Two years later the Pirates would improve on an 0-10 season to finish the 2022 season at 5-5 and a 2-4 6-3A Conference record, qualifying for the playoffs after Lakeside was defeated by the Fordyce Redbugs.

Entering as the fifth seed out of the conference, the Pirates would have to travel to Prescott to face the Curley Wolves who finished with an undefeated regular season, and as the number one seed out of the 5-3A.

With rain in the forecast and the temperature dropping, the Prescott Curley Wolves would win the coin toss and elected to receive the football.

Prescott would begin their drive at their own 32 and two plays later would score the first touchdown of the contest.

Prescott would score on their first three possessions for a 21-0 lead and would extend the lead to 35-0 before the buzzer sounded to end the half.

The Pirates offense could never gain any momentum, accounting for three punts, one fumble, and three interceptions.

Prescott would advance to the second round of the playoffs with a 35-0 victory, eliminating the Pirates from the playoffs.

Drew Central finishes the season with a 5-6 overall record.

Prescott will next face the Salem Greyhounds at home in the second round of the.

Kickoff for the second round matchup is set for 7 pm.