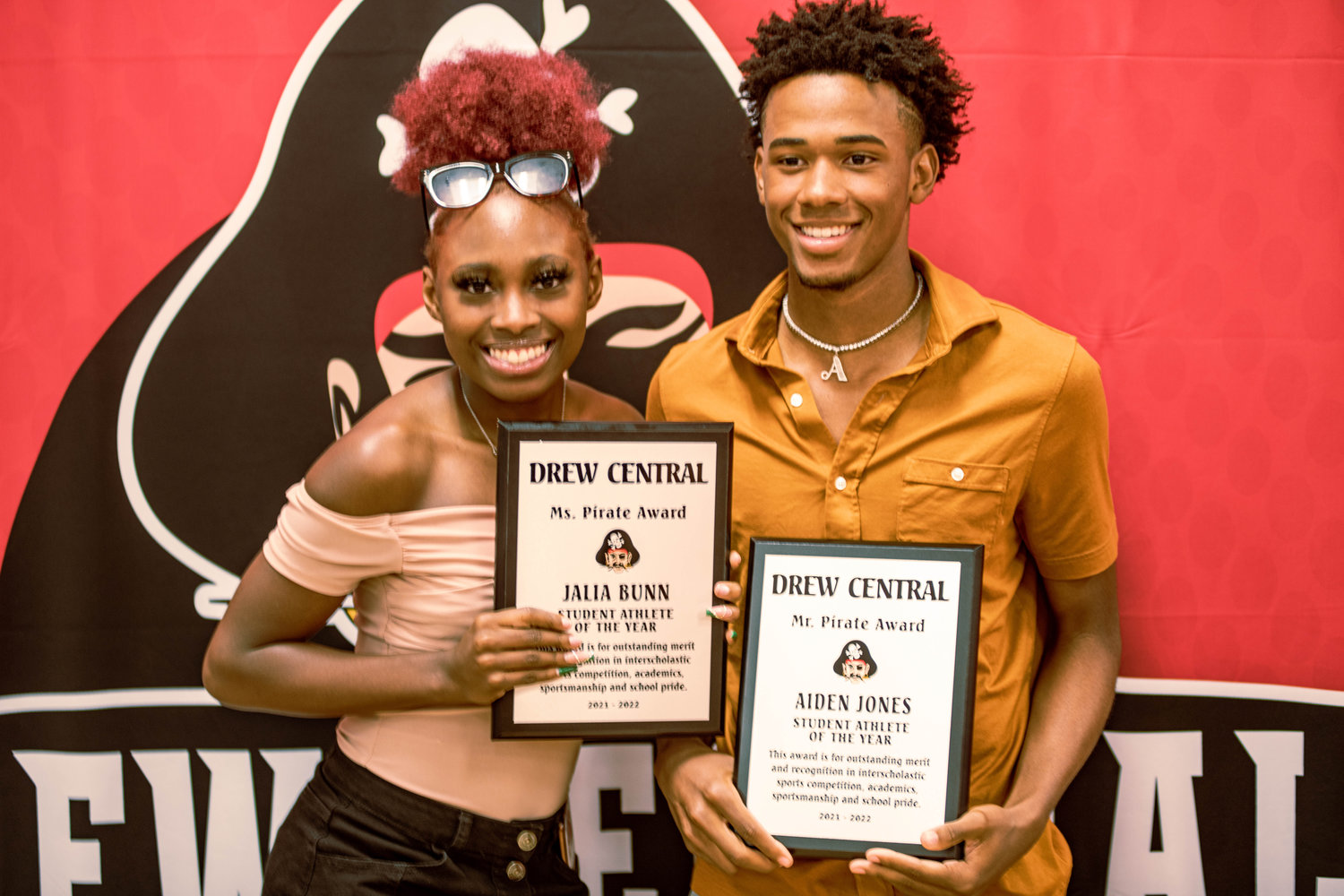 JAILA BUNN and AIDEN JONES have been selected for the Ms. Pirate and Mr. Pirate Award. The award was given to the student athlete that not only excelled in sports during the school season but also excelled in the classroom and in behavior. Each award is based on a point system with the highest point totals being named the honorary award winners. Bunn and Jones will also be the featured Pirate and Lady Pirate pictured on Drew Central’s website, www.dcpiratenation.com, for the 2022-23 school year. 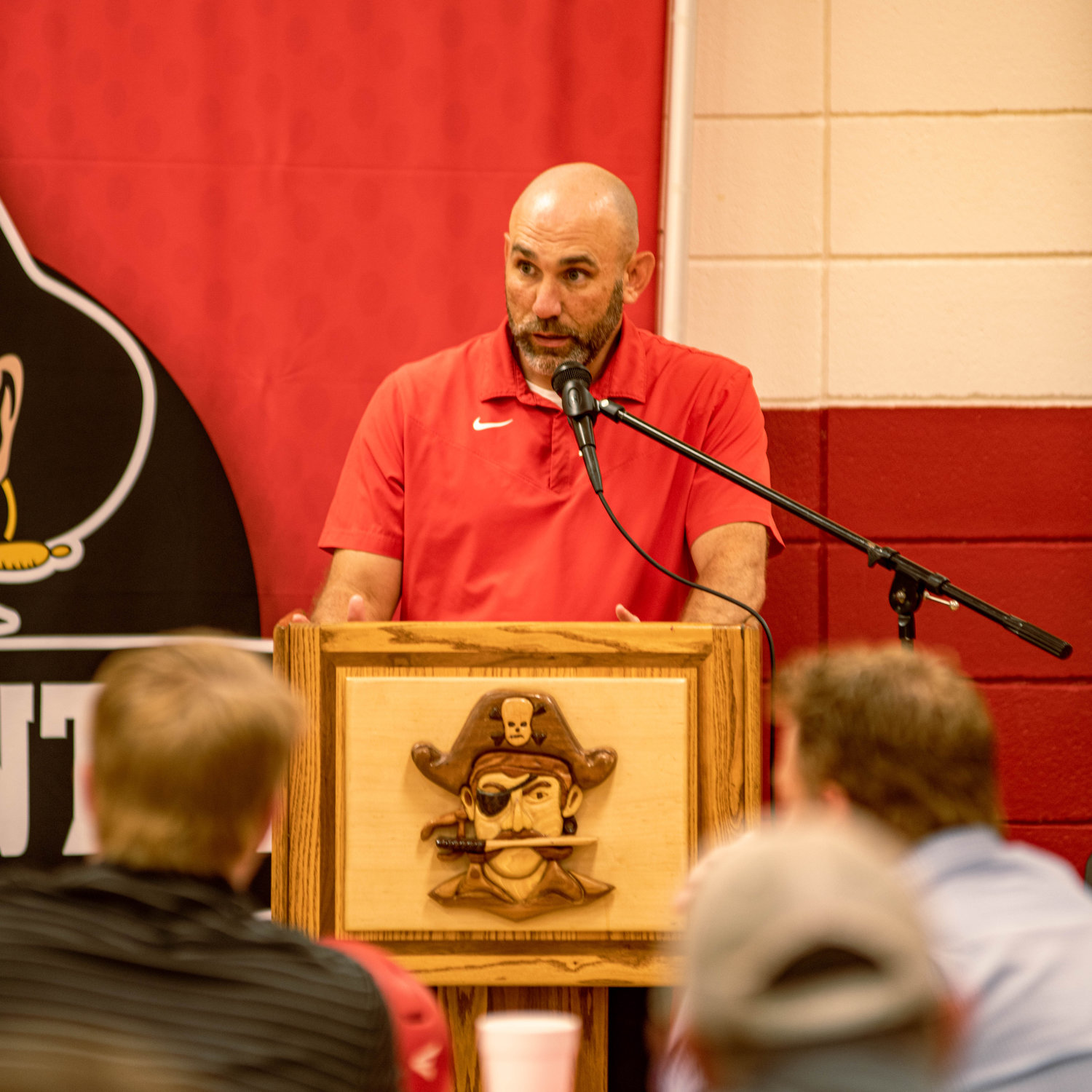 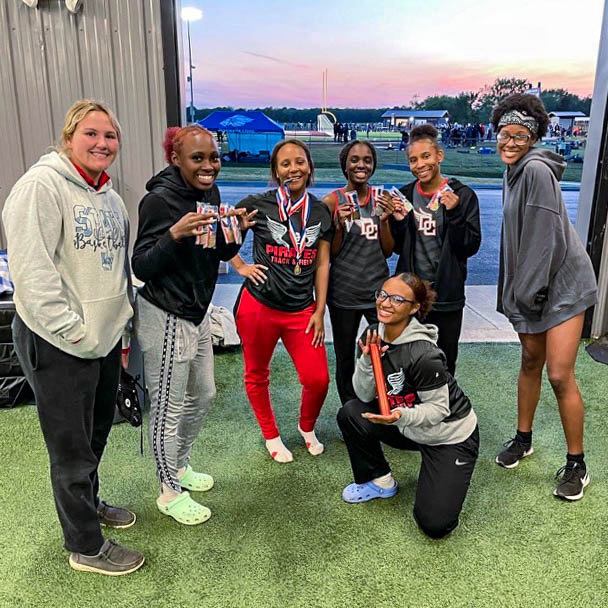 LADY PIRATE TRACK TEAM shows off their medals after the 2022 State Track Meet. The seven members of the Lady Pirates all qualified for the State Meet. 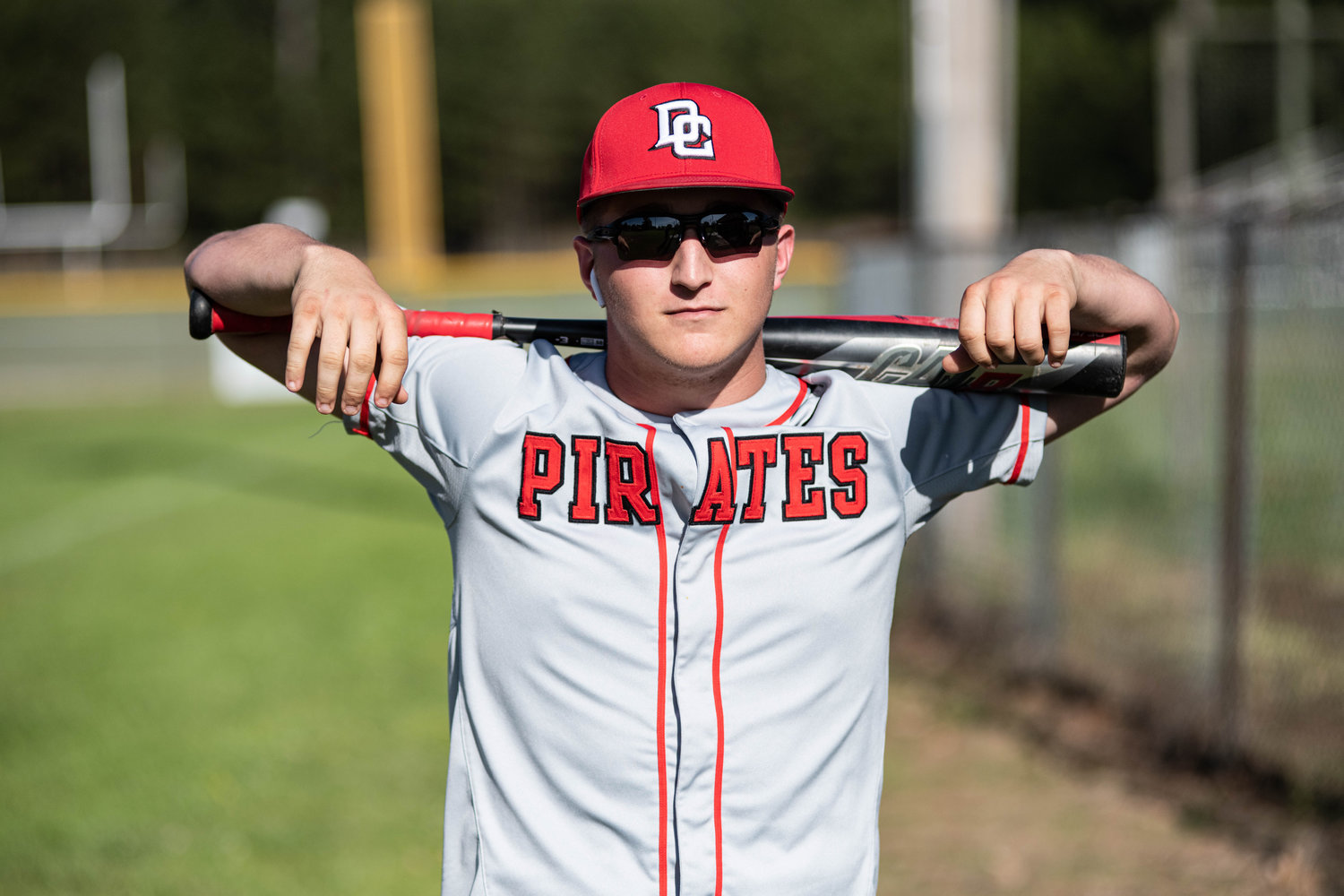 GAVIN WEAR (pictured) and TUCKER STANDLEY were named as the Pirate Pride award recipients by head baseball coach Aaron Goad. Standley and Wear were members of the Pirate Baseball and Football programs this season. 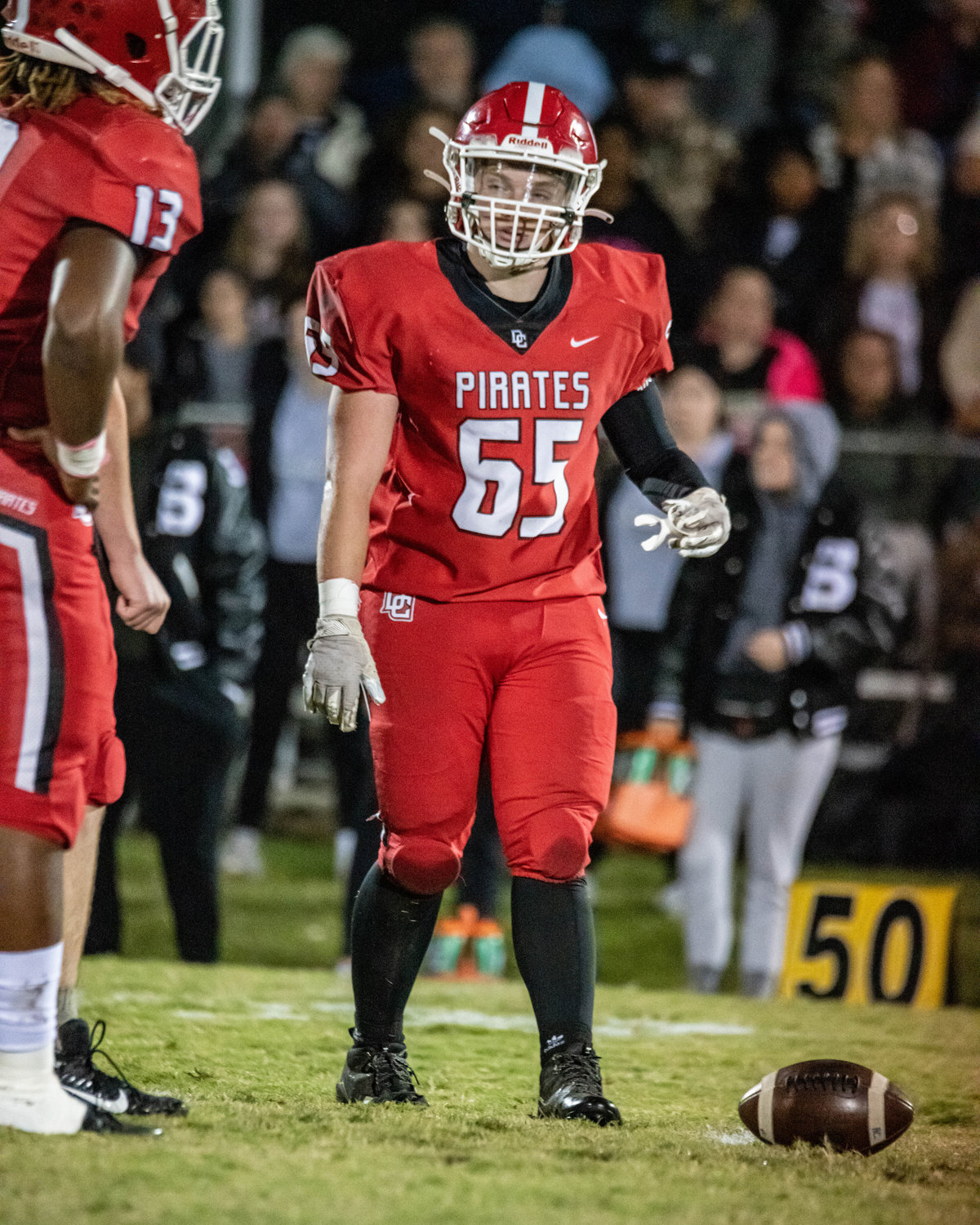 GAVIN WEAR and TUCKER STANDLEY (pictured) were named as the Pirate Pride award recipients by head baseball coach Aaron Goad. Standley and Wear were members of the Pirate Baseball and Football programs this season.
Previous Next
Posted Friday, May 20, 2022 3:35 pm
Jeff Young

The Drew Central School District honored the participants of the 2021-22 sports season with the annual All-Sports Banquet held on Tuesday, May 10.

The banquet is designed to honor all athletes that participated at the senior sports center throughout the year.

Coach Goad would open the banquet with an overall review of the sports year for Drew Central.

Drew Central also have several players being looked at to continue their athletic careers at the next level with Aiden Jones having a commitment to Arkansas Baptist for baseball and Antonio Remley having a commitment for football at the University of Arkansas at Monticello.

For tennis, Nate Cooper was the conference singles champion and was top eight in the state. Drew Central was the 8-3A Conference Champions as well as having the conference doubles champions in Kaleb Love and Michael Herman. All three advanced to the state tournament and won their opening round matches.

Next up was head football coach Matt Gonzales. Despite finishing with an 0-10 record, coach Gonzales is excited for the coming season despite losing some key seniors off this year’s team.

Gonzales announced that assistant and offensive coordinator, Daryl Scott, would be departing Drew Central to take the head coaching position at Mountain Pine.

For the Pirates, there were five players selected to the second team All-Conference with those players being Ashton Kelly, Cade Kling, Parker Cruce, Brayden Millett, and Luke Phillips.

Moving on to basketball, head boys’ basketball coach CJ Watson gave an overview of this past season’s accomplishments with the Pirates finishing with an overall record of 20-10 finishing third in conference.

The Pirates had four All-Conference selections with Drew Burton, Tralon Miller, Kade Bodiford, and Tristian Butler receiving the honors and Kade Bodiford being selected as an All-State selection and Butler being named to the State Tournament team.

The Lady Pirates finished as the Holiday Classic runner-up and were victorious in their opening game of the 3A Region 4 Tournament the Lady Pirates became the first Lady Pirate team to qualify for the 3A State Tournament in four or five seasons.

Sayveona Durden was selected as a part of the 3A All-Tournament team.

Kelsey Jackson and Emily Howard, who coached this season's Drew Central cheer teams came to the podium to announce the cheer participants and to hand out individual awards.

It will be the final season as cheer coach for the two teachers.

Becca Greenwood returned to announce the softball awards. The Lady Pirates were able to advance to the 3A Region 4 Tournament to end the season, it was the first appearance for the Lady Pirates in the tournament in a couple of seasons.

Gracie Connard was also an All-Conference selection as well as an All-State selection. Connard also received the Golden Spike, Golden Glove and Silver Slugger award after recording 55 hits and striking out 45 batters as a pitcher. Connard was also nominated to the 3A State All-Star team.

Aaron Goad, head baseball coach, was the next presenter, as the Drew Central Pirate baseball team also had an appearance in the 3A Region 4 Tournament and had five All-Conference selections and one All-State selection.

Drew Burton was selected as an All-State selection.

In the final showcase of student athletes of the night, the 2022 Drew Central Track and Field were honored.

The Drew Central Track and Field team captured multiple top five finishes in district and in the State Meet. The team also saw top finishes at the Meet of Champions.

Gabe Butcher had a fifth-place finish at district in the 400-meter dash.

The Pirates placed fourth in the 4x800 meter relay.

Moving on to the 3A State Meet, Jaila Bunn captured State Championships in the 100-meter dash and 200-meter dash. Edriana Hunter placed fifth in the 400-meter dash.

Also being selected to All-District was Jaila Bunn who concluded her career at Drew Central.

In her career, the senior runner has amassed seven State Championships in the 1x100 meter dash, 1x200 meter dash and as a part of the Drew Central relay team.

Bunn and the relay team also qualified for the Meet of Champions that was held at Russellville High School on Wednesday, May 11.

In the Meet of Champions, Bunn would place third in the 100-meter dash and eighth in the 200-meter dash with the relay team placing 12th in the 4x200 meter relay.

After the announcement of the track awards, Coach Goad would take the podium for the final award presentation of the night, the male and female Student Athletes of the Year also known as Mr. Pirate and Ms. Pirate awards.

The basis of the awards not only involves the athlete’s participation in their prospective sports but also involves their overall performance in the classroom as well as their overall attitude and discipline during the school year.

The award is presented to an outgoing senior each year with the participants being the feature photo on the Drew Central website, www.dcpiratenation.com, for the next school year until the next Mr. and Ms. Pirate are crowned.