Soaring costs and historic inflation is hitting the hospital industry and Drew Memorial Health System is not immune, according to DMHS Chief Executive Officer Scott Barrilleaux, who briefed the Court on the Health System’s financial situation at the regularly scheduled Quorum Court meeting Monday, Aug. 8.

“I want to talk to y’all about developments that are happening,” Barrilleaux began after introducing member’s of the hospital board who were in attendance. “There is not any hospital that I know if that isn’t experiencing some sort of financial distress at the moment due to labor costs, supply costs, revenue drops, those sort of things.”

Barrilleaux went on to describe the trouble in the hospital industry across the State, informing the court that St. Vincent lost $75 million and other nearby hospitals are also struggling as he honed in on DMHS’s recent financial woes.

“As you will remember, last year- our fiscal year ends in March- we had a nice little profit at the end of it,” he reminded the Court. Going on he told the court that since shortly before that, the Health System began to see issues financially with nursing contracts. “The way it is leaving us is worse and there are a lot of factors going in to that.”

Barrilleaux cited raising labor costs but also put a large part of the blame on how insurance companies pay for services with some of the biggest revenue coming from Medicaid and Medicare whose payment schedules do not cover the cost of caring for the patient. Money given to the hospital in advance payment to help through the COVID pandemic is also a major concern. Advance money given to the hospital was based on anticipated charges to Medicaid but due to staffing issues and a lower admittance rate into the hospital, the repayment schedule for the advanced funds did not cover the amount given and a lump sum is expected to be due back. Staffing issues have also caused the hospital to not be able to fill all beds available which has also hurt the revenue stream. Barrilleaux told the court he was there to let them know where the hospital was at the moment and the steps they are doing to try and solve the revenue problems. He informed the court he is working to try and reduce labor costs, stating the hospital has internal contract with all the traveling nurses on staff, helping to lower the labor costs. He is also in talks to determine if the hospital can get a deferral on their loan that was used for facility improvements.

Another step taken by the hospital was to release Dr. Kelly Shrum from his contract with his clinic. Shrum is now working with Mainline for his clinic but is still delivering and performing surgeries at the hospital. According to Barrilleaux, this cut costs associated with maintaining a clinic but still allows the hospital to collect revenue from deliveries and surgeries. Barrilleaux said the administration was looking very closely at how and where to cut costs stressing the importance of being very careful about making sure money being spent is spent in the right places.

Hospital Board president Mike Akin supported Barrilleaux in the meeting, confirming the industry as a whole is struggling and the hospital and board are working to find solutions to the financial problems so Drew County can continue to have the services offered by the hospital available to the community.

Jake-braking, which is the use of a compression release engine brake, was also on the agenda Monday with Ordinance 2022-22 which will prohibit the use of motor-brakes and compression release engine brakes in the County. The ordinance was in response to citizen complaints and described Jake-braking as a process that “creates loud, excessive, harsh, irritating and annoying noises that unreasonably disturbs the peace of citizens residing in the area of Drew County’s highways and roads.” The ordinance points out that Drew County is not mountainous and it’s highways and roads are not so “irregular in their grade” that Jake-breaking is not necessary for a truck to decelerate” in the County. The Ordinance, which passed with one no vote by Renee Knowles, Justice of the Peace for District 9, one member absent, and seven yes votes states Jake-braking unlawful except when used in an emergency to avoid damage to property or personal injury. Anyone violating the ordinance will be guilty of a misdemeanor and will be fined up to $150 for each offense. Enforcement will only be carried out where signs have been posted in the area so drivers will have fair notice of the ordinance. The ordinance contained an emergency clause and goes in to effect immediately, The County will begin erecting signs in the future.

Also passed during the meeting:

Ordinance 2022-17: The ordinance is the fifteenth amendment to the 2022 annual budget and corrects expense coding in the budget to transfer Adult Court Funds from the Circuit Judge fund to the Adult Drug Court fund.

Ordinance 2022-18: The ordinance allows for $20,000 from a Court House Security Grant to be spent to build two holding cells in the courthouse. The courthouse currently has no where to hold prisoners awaiting a hearing in the court house. The cells will be in the Sheriff’s Office.

Ordinance 2022-19: The appropriation ordinance was passed to provide funds to replace equipment for the 911 system that was damaged by a lightening strike in the amount of $75,740.81.

Ordinance 2022-20: The appropriation ordinance was passed to allow the County to purchase $1 million worth of asphalt amid rising prices that are expected to continue rising. Drew County Judge Robert Akin also asked the Justice’s to survey their districts and let him know what roads were in need of repairs.

Ordinance 2022-21: Act 224 of the 2022 Fiscal Session of the Arkansas Legislature appropriated funds for Law Enforcement Stipend grants for the fiscal year ending June 30, 2023. The stipend authorized a payment of $5,000 to each eligible full-time law enforcement officer. The appropriation ordinance will allow the County to issue the stipend to each eligible officer. The total amount appropriated, and will be paid by the State, is $60,000 for the stipend, $4,590 for social security matching and $9,192 for retirement.

UAM Volleyball Falls to GAC Rival SAU on the Road 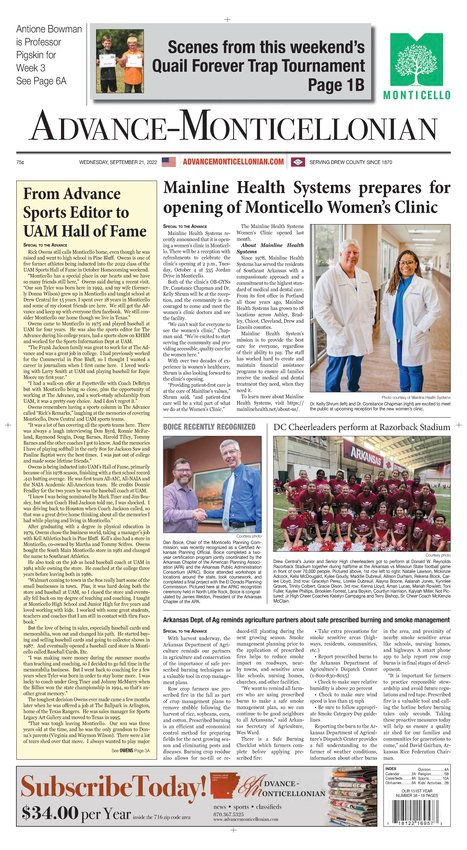