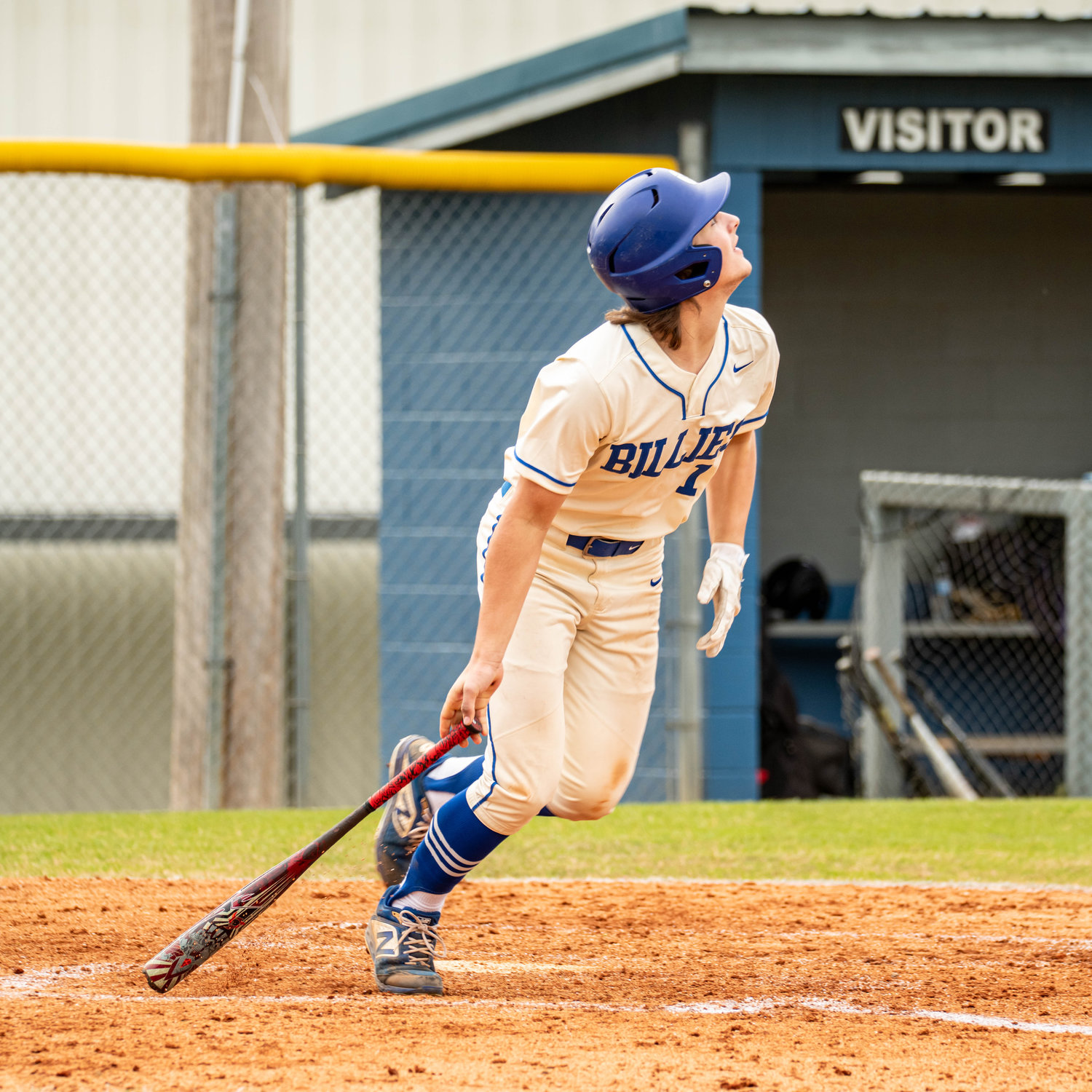 JOHN FROST went 2 for 8 during Monticello’s games during the 4A South Regional Tournament. Frost drew one walk and was credited with an RBI over the three games 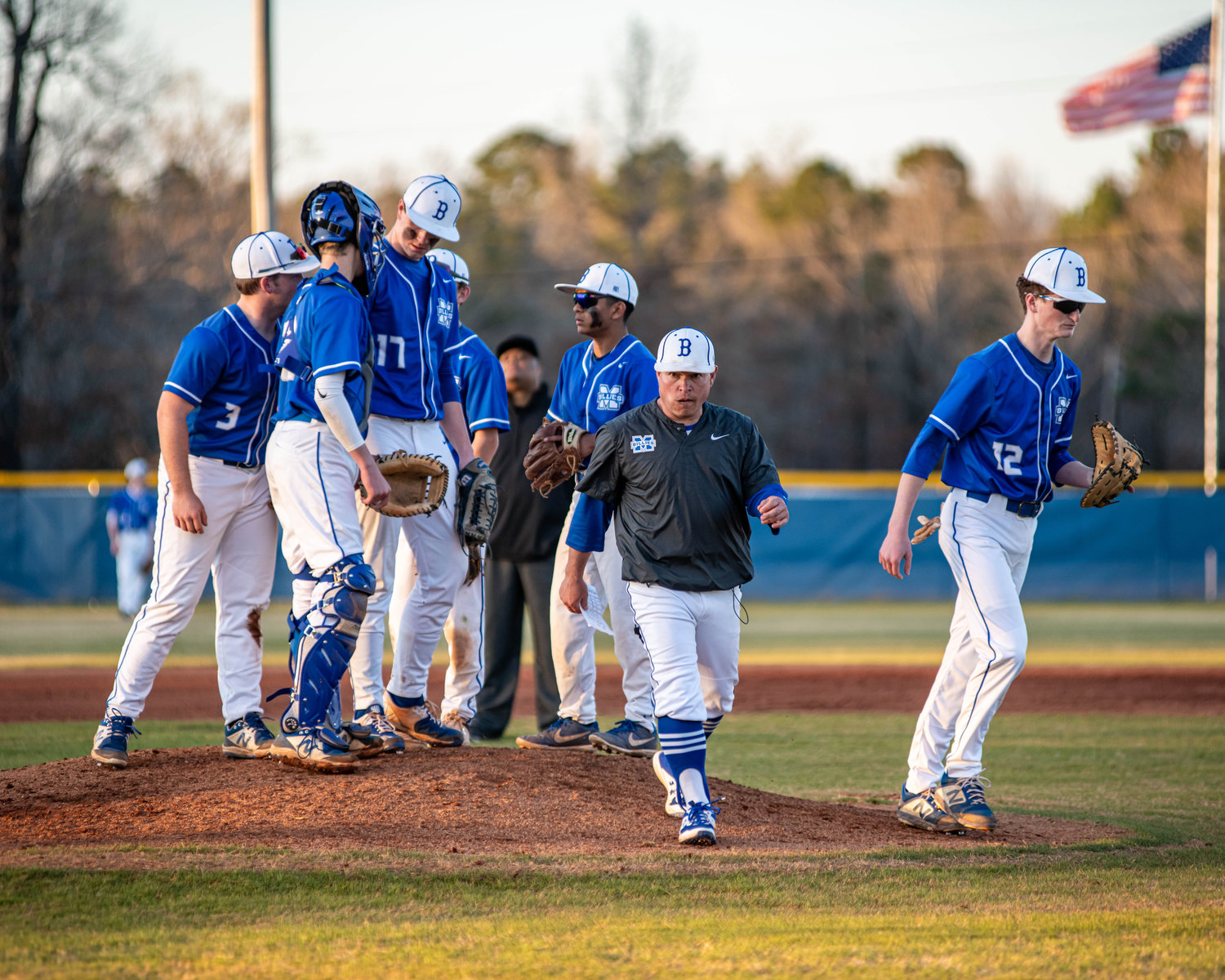 SCOTT JOHNSON exits the mound after a visit during Monticello’s opening conference contest of the season. Monticello led the 8-4A for most of the season before dropping to third in the conference, but coming back to close out the regular season as the 8-4A Conference Champions. Monticello placed second in the 4A South Regional Tournament and will be the second seed from the regional to enter the 4A State Championship Tournament with a 20-10 record.
Previous Next
Posted Friday, May 13, 2022 2:24 pm
Jeff Young

The Monticello Billies have extended the 2022 season after finishing second in the 4A South Regional Tournament held in Malvern this past week. With the second place finish the Billies will now travel to Nashville, having qualified to participate in the 4A State Championship Tournament.

Coming into the 4A South Regional Tournament as the number one seed from the 8-4A, the Billies would begin the tournament on Friday, May 6, facing the Bauxite Miners. The Games were originally expected to begin on Thursday but severe weather forced the contests to be pushed back a day.

Taking the mound for the Billies to open the tournament was Tucker Breedlove and the Minors were able to get the game started with a double, however the runner would be thrown out at third base by John Frost to Cade Pigott after trying to stretch the play into a triple.

Breedlove would get out of the inning by allowing a single and striking out two.

Monticello would get on the scoreboard in the bottom half of the inning after Warren Pennington drew a walk followed by Pigott and Breedlove loading the bases after being hit by pitches.

Brenden Brown would hit into a fielder’s choice and would reach first safely with Pennington beating the attempt at the plate to give the Billies a 1-0 lead.

Pigott became the second out of the inning after a failed attempt to steal home, but Frost would single to score Breedlove to give the Billies a 2-0 lead.

Monticello extended the lead in the bottom of the second inning after Kaleb Romero reached first on an error, stealing second and then advancing to third. Pennington would single on a bunt that would score Romero for the 3-0 lead.

Monticello retook the lead in the bottom of the sixth inning after Breedlove led things off being hit by a pitch. Brenden Brown would single. Blaine Hayden would advance Breedlove to third on a fielder’s choice with Brown out at second followed by a single by Brooks Harvey to score Breedlove for the 4-3 score.

Bauxite tied the contest back up, 4-4, in the top of the seventh.

In the bottom of the seventh inning, Doerian Allen would lead the Billies off with a single followed by Pennington reaching on an error to advance Allen to second. Pigott would hit a single to left field in the next at bat to score Allen to take the contest 5-4, qualifying the Billies for the 4A State Championship Tournament.

Tucker Breedlove would give the BIllies 6.1 innings on the mound allowing four runs on eight hits, striking out seven, and walking one. Jagger Hines picked up the win for the Billies in relief for Breedlove. Hines pitched .2 of an inning with no hits and no runs.

As a team, the Billies were 6 for 23 from the plate with Allen, Pennington, Pigott, Brown, Frost, and Harvey all recording a hit in the contest.

Returning for the semi-final contest on Saturday, May 7, to face the Fountain Lake Cobras, the Billies found themselves down 2-0 with the Cobras scoring runs in the top of the first and fourth innings.

Monticello would cut the lead to 2-1 in the bottom of the sixth inning after a leadoff walk to Brenden Brown, Brown would be out at second during the next play as Pigott hit into a fielder’s choice. After the second out of the inning, Pigott would score on a single by Frost and a fielding error by the Fountain Lake right fielder.

Trailing 2-1 in the bottom of the seventh inning, Brooks Bowman would lead off successfully reaching first on an error. Samuel Napier would single with Bowman advancing to third. Bowman would score on a balk by the Cobra pitcher, advancing Napier to second.

In the next at bat, Doerian Allen would hit a sacrifice fly to left field that would score Napier for the Billie win, 3-2.

Jagger Hines would throw for 6.2 innings in the no-decision for the Billies 6.2 innings, allowing two runs on five hits with eight strikeouts and two walks. Easton Byrd would get the win in relief for the Billies facing one batter.

The Billies went 4 for 24 from the plate with Allen, Frost, Napier, and Blackmon recording the hits in the contest.

Returning later in the day on Saturday for the championship game, the Billies would face the Arkadelphia Badgers.

After getting out of the first inning only allowing a single, Doerian Allen led things off for the Billies with a single. After two outs with Allen advancing to third, Breedlove would single to score Allen for a 1-0 lead.

Arkadelphia returned in the top of the second inning to tie the contest 1-1.

Monticello’s Brooks Bowman reached on an error for the first runner in the bottom of the second inning and would advance to second on a wild pitch. Brooks Harvey connected for a single to score Bowman. After the second out of the inning, Harvey would score on a steal of home with Allen being picked off at first. With the score, the Billies led 3-1.

Arkadelphia would take the lead in the top of the third inning, scoring three runs for a 4-3 advantage.

The Badgers extended the lead to 6-3 after scoring two runs in the top of the fifth inning.

Opening the bottom of the fifth inning with two groundouts, Pigott would reach first on a walk followed by Breedlove reaching base on an error to Pigott to cut the Badger lead to 6-4.

Arkadelphia came back in the top of the sixth inning to score three runs to extend their lead to 9-4 with Monticello scoring their final run of the contest in the bottom if the sixth inning after a walk to Brown scored Bowman to make the score 9-5.

Arkadelphia scored their final four runs in the top of the seventh inning to set up the final score of 13-5 with Monticello taking the second seed from the 4A South Regional heading into the 4A State Championship Tournament.

Easton Byrd would take the loss in the contest, pitching 6.1 innings allowing 12 runs on 13 hits, striking out four and walking three. Samuel Napier finished the day on the mound for the Billies pitching .2 of an inning allowing one run on two hits.

The Billies were 5 for 28 from the plate with Brooks Harvey and Tucker Breedlove recording two hits each and Allen recording the other hit for the Billies.

The Billies will travel to Nashville on Thursday. May 12, to face the fourth seed from the 4A East, the Robinson Senators. The contest between the Billies and Senators is scheduled to begin at 3 pm.

Robinson finished the regular season as the Conference Champions from the 5-4A one game ahead of Lonoke who defeated the Billies in their final regular season contest 13-0.

The winner of Monticello and Robinson will advance to face the Huntsville Eagles on Friday, May 13, with a 3 pm start time scheduled.