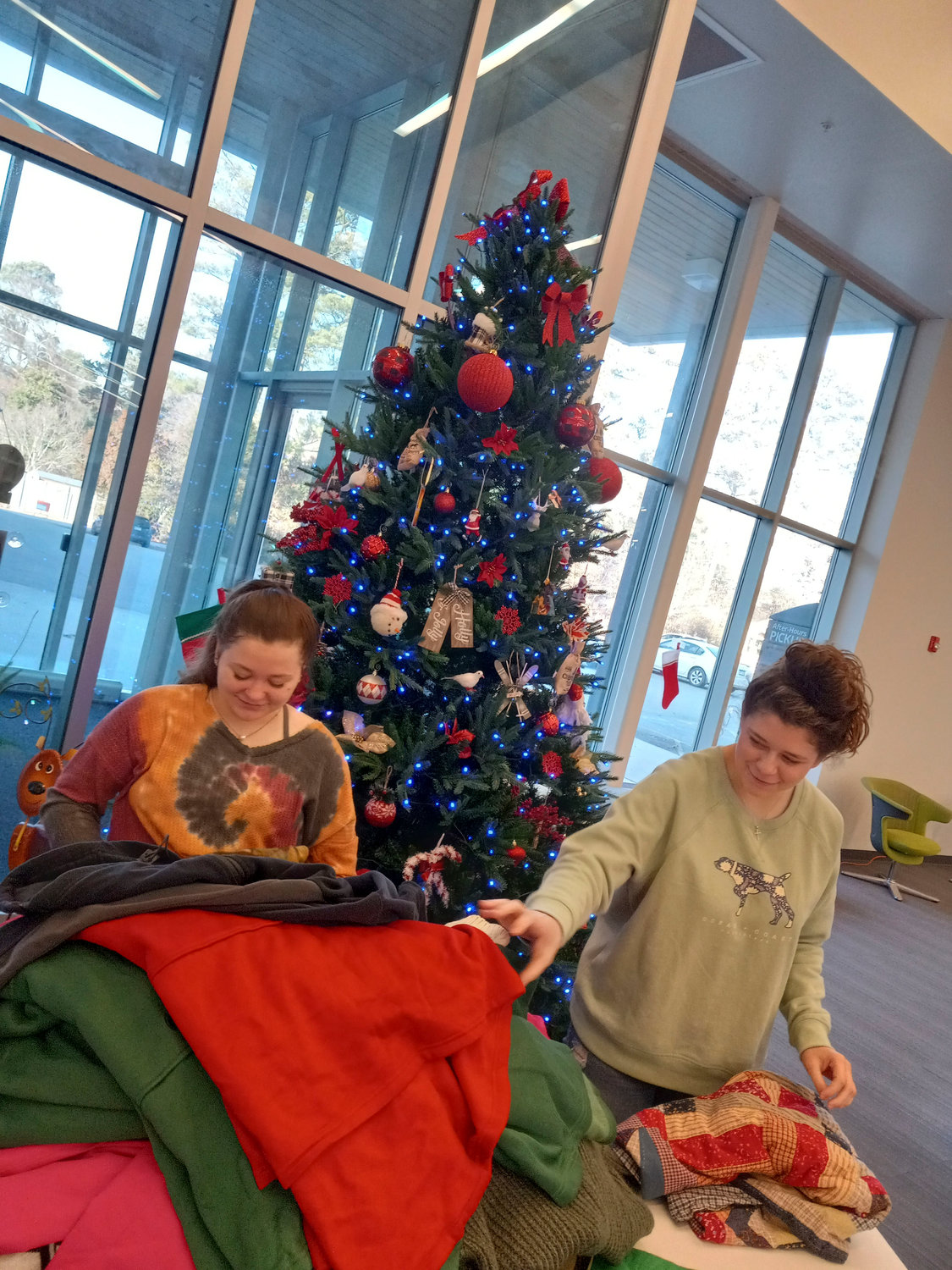 Monticello Branch Library collected more than 32 sweaters as part of Arkansas PBS’s Mister Rogers’ Neighborhood Sweater Drive this November. Gracie and Mady prepared the donations for distribution by Belleview Estates and The Woods (both of Monticello) as much colder weather is set to enter the state.
Posted Monday, January 16, 2023 8:00 am
Special to the Advance

Shannon Rodriguez, Monticello Branch Manager was thrilled with the community response and how these sweaters and other cold weather clothing will benefit neighbors in need as extremely cold temperatures are forecast. “We live in a supportive community that responds consistently when others are in need.”

Monticello Branch Library was one of 47 libraries across Arkansas participating in this year’s statewide Mister Rogers’ Neighborhood Sweater Drive, which is a tribute to Fred Rogers and his example of being a caring neighbor. A complete list of libraries and additional information is available at myarpbs.org/sweaterdrive. The statewide drive collected more than 2,500 cold weather items for those in need.

During the Neighborhood Sweater Drive, members of the community donated new or gently worn sweaters, as well as other cold-weather clothing. The sweaters collected in the drive were forwarded to those in need at Belleview Estates and The Woods (both of Monticello).

The statewide Mister Rogers’ Neighborhood Sweater Drive was sponsored by Crain Buick GMC of Conway and 911 Restoration. Additional information is available at myarpbs.org/sweaterdrive.

“All of us, at some time or other, need help,” Fred Rogers said. “And, whether we’re giving or receiving a sweater, each one of us has something valuable to bring to this world.

“That’s one of the things that connects us as neighbors – in our way, everyone is a giver and receiver.”

To help set the tone for a “comfortable” visit with his young viewers, Rogers put on a sweater and changed into sneakers to help children settle in for “Mister Rogers’ Neighborhood.” All of Rogers’ original sweaters were knitted by his mother, Nancy McFeely Rogers. Each year, she knitted a dozen sweaters and gave them to family and close friends at Christmas.

For more than 40 years, “Mister Rogers’ Neighborhood,” PBS’s longest-running children’s series, earned four Daytime Emmys. As a testament to his legacy, Rogers received a Lifetime Achievement Award in 1997 and was recognized in 2002 with a Presidential Medal of Freedom, the nation’s highest civilian honor, for his contributions to children’s development and education using broadcast television.

The Fred Rogers Company was founded by Rogers in 1971 as the nonprofit producer of “Mister Rogers’ Neighborhood” for PBS. In the years that followed, it not only created hundreds of episodes, but it also extended Rogers’ values and approach to other efforts in promoting children’s social, emotional and behavioral health and supporting parents, caregivers, teachers and other professionals in their work with children. The Fred Rogers Company continues to build on his legacy through a wide variety of media and by engaging new generations of children and families with his timeless wisdom. Additional information is available at FredRogers.org.

The Southeast Arkansas Regional Library is committed to providing diverse services and programs to its communities in order to promote inspiration, information and recreation as well as lifelong learning through the provision of free access to cultural, intellectual, and informational resources