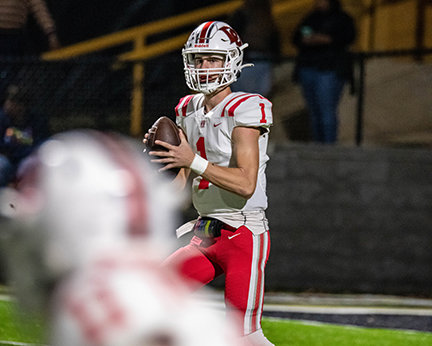 KADE BODIFORD looks for an open receiver against Rison Friday night in Rison. The Pirates kept pace with the WIldcats for most of the first quarter of play, before Rison went up two scores early in the second quarter.
Jeff Young 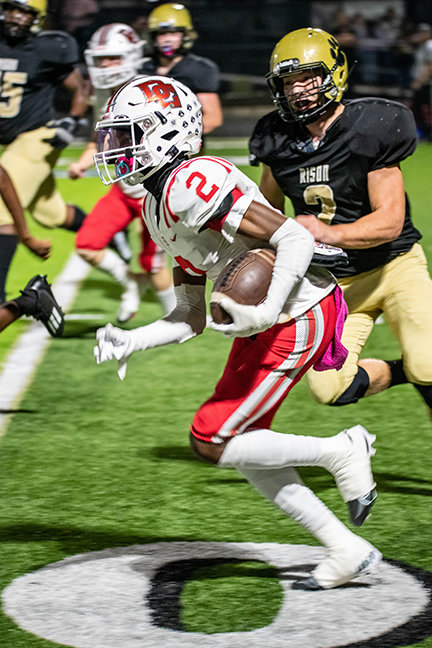 TRAMOND MILLER was responsible for two touchdowns in Fridays contest against Rison. Miller had touchdown receptions of 45 and 22 yards.
Jeff Young 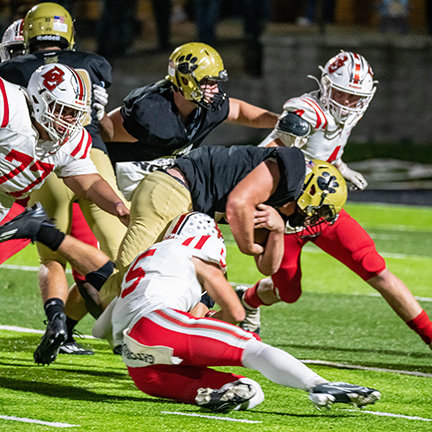 ASHTON KELLY makes the stop on the Rison runningback. Kelly scored the final points of the contest after a recption on a two-point conversion.
Jeff Young 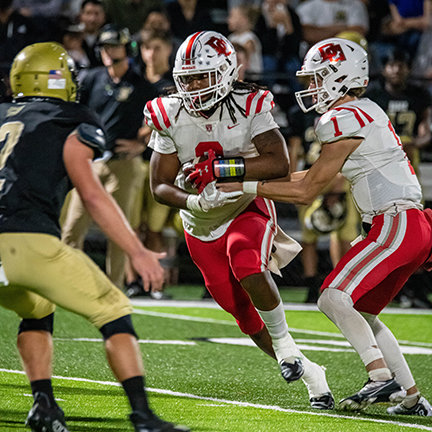 BRAYDEN MILLETT takes a handoff from Kade Bodiford on Friday night. The Pirates used a limited running game against Rison with the passing offense being fairly successful agasint the Wildcat defense.
Jeff Young 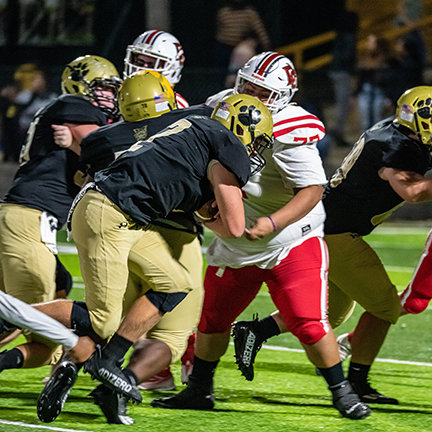 JOEL BRAN makes a move to hit the Rison running back.
Jeff Young 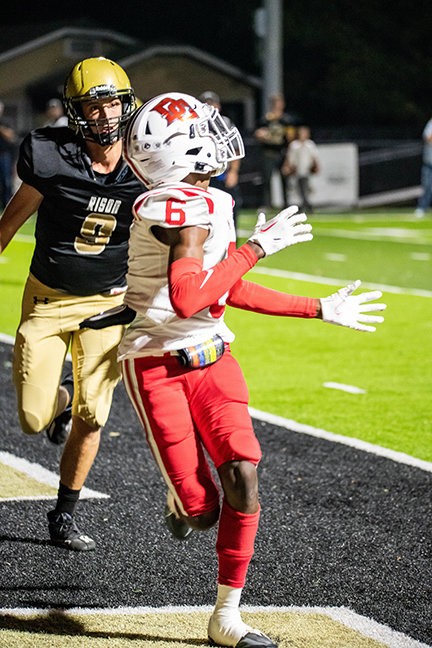 Entering Friday night's contest with the Rison Wildcats, the Drew Central Pirates had to have help from two other conference contests in order to keep their playoff hopes alive.

For the Pirates to have a chance, there were three possible scenarios that would give the Pirates a shot at the playoffs.

First, was that a victory over the Wildcats would put the Pirates in the playoffs outright. The next scenario was that if Fordyce beat Lakeside and Barton defeated Camden Harmony Grove then the Pirates would enter as the fifth seed.

The final scenario was that Barton, Drew Central, and Lakeside all lost, then the final two spots would be determined by a coin flip.

Entering into their contest with Rison, the Pirates would enter with a 5-4 overall record, gauranting Drew Central with at least a .500 regular season record and the best start for a first year head coach since football was restarted at the school.

Drew Central would win the opening coin toss and elected to receive the football and would start their opening drive at their own 20-yard line after the Rison kick went into the end zone for a touchback.

Kade Bodiford would run the ball on the first play of the game for a three yard pickup followed by another three yard run by Tramond Miller.

On third and four, Bodiford connected with Brayden Millett for a six yard gain and a first down.

Bodiford connected with Miller on the next pass to gain out to the Rison 37, but after two incomplete passes, the Pirates were hit with a holding penalty to move the ball back to the Pirate 49.

A reception by Ja’Corrian Love brought the ball back into Rison territory to the 45-yard line.

After an incomplete pass, Bodiford connected with Miller for a 45-yard touchdown pass with 8:45 remaining in the first quarter.

The two-point play was not successful as the Pirates took a 6-0 lead.

The Wildcats would begin their drive at their own 41-yard line and would move the ball down to the Pirate 38 in seven plays, all on the ground.

With 4:53 remaining in the quarter, Kelven Hadley would break free for the 38-yard touchdown run. Hadley added the two-point conversion to give Rison an 8-6 lead.

The Pirates would begin their next drive at their own 16-yard line.

Bodiford hit Love for a 30-yard gain to the Pirate 46, however a holding penalty at the 16 negated the gain and moved the ball back to the Pirate six.

The next two plays resulted in two consecutive incomplete passes to bring up a third and 20.

A pass to Miller advanced the ball to Pirate 44 for a first down and would connect again with Miller to move the ball to the Rison 35 two plays later.

A completed pass to Ashton Kelly gained the Pirates four yards and a run by Bodiford advanced the ball to the Rison 12-yard line.

After an incomplete pass, Bodiford connected with Love on the left side of the end zone for a Pirate touchdown with 3:07 left in the first quarter.

After an unsuccessful two-point attempt, the Pirates retook the lead 12-8.

Beginning their second drive of the contest on their own 36-yard line, the Wildcats would go back to the ground attack, advancing the ball down to the Pirate 20-yard line with seconds remaining in the contest.

Drew Central Head Coach Larry White addressed the officials that time had expired before the Wildcats were able snap the ball, however the plea fell on deaf ears as the officials ruled that the play would stand.

The Wildcats would score three plays later with Bradyn Dupuy taking the ball in from one yard for the score.

Roger Boswell added the two-point conversion to give the Wildcats a 16-12 advantake with 10:36 remaining in the half.

Drew Central would turn the ball over on downs on their next drive with 8:39 remaining in the half.

Starting with the ball on their own 48-yard line, Hadley would break free to extend the Wildcat lead to 24-12 after the two-point play with 8:28 left in the half.

Rison’s defense forced the Pirates to punt, giving Rison possession on the Rison 41.

Rison would reach the end zone with 3:01 remaining in the half after a two-yard run by Dupuy and a reception by Za’Kyler Walker for the two point play to extend the lead to 32-12.

Rison would get one more score in the half after Avery Hopson recovered a fumble by Bodiford at the Rison 47-yard line, returning the ball for a touchdown with 49 seconds remaining in the half. Dupuy added the conversion to make the halftime score 40-12.

After the halftime break, the PIrates learned that Barton had upset Camden Harmony Grove 42-40 and the Fordyce had defeated Lakeside by a score of 57-47 to give the Pirates the fifth playoff spot no matter the result of the current contest.

Rison would score on their first possession of the second half to put the “Sportsmanship Rule” into play with 10:31 reamining in the third quarter.

With the storms in the area starting to roll in, and leading 48-12, the Pirates would get the final score of the contest after Bodiford connected with Miller with 11:18 remaining in the contest.

Bodiford connected with Ashton Kelly on the two-point attempt to set up the final score of 48-20.

With the win, the Pirates finished the regular season with a 5-5 overall record and a 2-4 conference record, an improvement from 0-10.

Drew Central Pirate Head Coach becomes the first coach to take his Pirate team to the playoffs in his first year as the head coach of the program and the 5-5 record marks the best start for a first year head coach with the program.

Rison will enter the 3A State Playoffs as the number one seed out of the 6-3A and will have a first round bye.

Camden Harmony Grove enters as the second seed from the conference and will face the fifth seed out of the 3-3A, the Corning Bobcats who enter the playoffs with an overall record of 3-7 and a conference record of 2-4. Camden will be the host team.

Fordyce will enter as the third seed and will face the fourth seed from the 1-3A, hosting the Mansfield Tigers who enter the playoffs with a 4-3 conference record and a 7-3 overall record.

Barton will enter as the fourth seed and will travel to Smackover to face the Buckaroos who enter as the seed seed from the 5-3A and have an overall record of 6-4 and a 3-2 conference record.

For the Drew Central Pirates, the Pirates will travel to Prescott on Friday, November 11, to face the number one seed from the 5-3A, the Prescott Curley Wolves.

Prescott enters with an undefeated record of 9-0 and 5-0 in conference.

This will mark the third time the Pirates have qualified for the state playoffs in school history.

The Pirates lost their first playoff contest to Hoxie in 2019 and was scheduled to play Prescott in the 2020 playoffs, but a positive Covid exposure cancelled the contest about two hours before kickoff.

The Drew Central Pirates and Prescott Curley Wolves will kickoff at 7 pm on Friday in Prescott.