SAU reclaims Battle of the Timberlands Trophy 20-7 over UAM 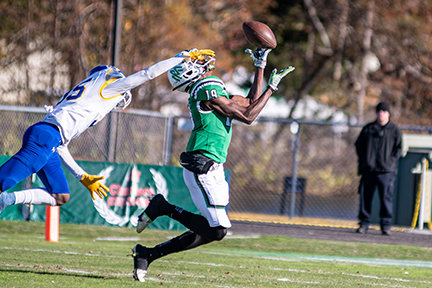 JORDAN MANSFIELD catches a pass for a first down for the Weevils for a 43-yard gain.
Jeff Young 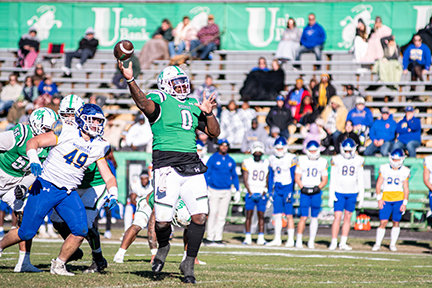 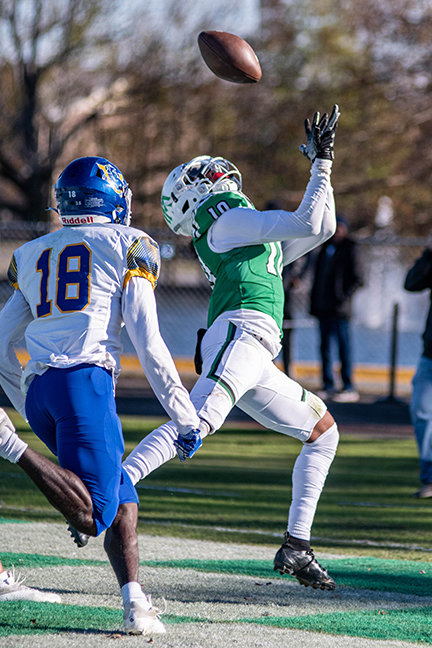 ISAIAH CROSS in the right corner of the endzone to tie the contest at 7-7. SAU would score 13 points in the second half to reclaim the Battle of the Timberlands Trophy with a 20-7 victory.
Jeff Young
Previous Next
Posted Wednesday, November 16, 2022 10:10 am
Jeff Young

The Muleriders would win the opening coin toss and would defer to the second half.

After a 35-yard return by DeShawn Jackson, the Weevils would begin the opening drive at their own 27-yard line after a holding penalty moved the ball back from the 37.

UAM would be forced to punt the ball away on the drive with SAU taking over at their own 16-yard line.

The Muleriders would cover the 84 yards in 10 plays, scoring the touchdown with 9:19 remaining in the first quarter to take an early 7-0 lead after the extra point.

SAU would maintain their lead throughout the first quarter.

UAM would record a turnover with 4:14 remaining in the half after Brycen LeBlanc recovered the Mulerider fumble at the UAM 26-yard line.

UAM would move the ball into SAU territory on the second play of the drive after Edwin Kleinpeter connected with Jordan Mansfield for a 43-yard gain to the SAU 31-yard line.

Hayden Thomas would carry the ball down to the 25 on the next two plays, but the Weevils would lose three yard to the 28 after Kleinpeter was sacked by SAU’s Dawson Scott.

Kleinpeter would connect with Isaiah Cross on the next pass for a 28-yard touchdown pass in the right corner of the endzone for the Weevil touchdown.

SAU would receive the ball to begin the second half, returning the ball to the SAU 31 after the 43-yard kick by Zachary Grisotti.

The Muleriders would advance the ball to the UAM one-yard line but the Weevil defense was able to force the Muleriders to turn the ball over on downs at the one.

The Weevils were able to advance the ball out to the UAM 25, but were forced to punt to give possession back to SAU.

Both defenses were able to male stops throughout the third quarter, holding each other to zero points in the quarter to enter the fourth tied 7-7.

SAU would retake the lead with 6:04 remaining in the contest.

Beginning their drive on their own 10-yard line, the Muleriders would cover the 90 yards in 13 plays, capping off the drive with  a 20-yard run by OB Jones.

UAM would turn the ball over on their next possession after Xavier Branch intercepted Kleinpeter’s pass, returning the ball 34 yards to the UAM 44.

SAU would seal the contest and claim the Battle of the Timberlands Trophy after the turnover, covering 34 yards in four plays.

UAM’s season would come to an end on the SAU 21-yard line after a seven-yard sack by Damon LeGrande and Garrett Roberts to Edwin Kleinpeter.

UAM used two quarterbacks in the contest with Hunter Watson completing one of three passes for three yards, but led the team in rushing with 34 yards.

Kleinpeter led in passing with 231 yards, with a touchdown and an interception going 17 of 27 and being sacked four times