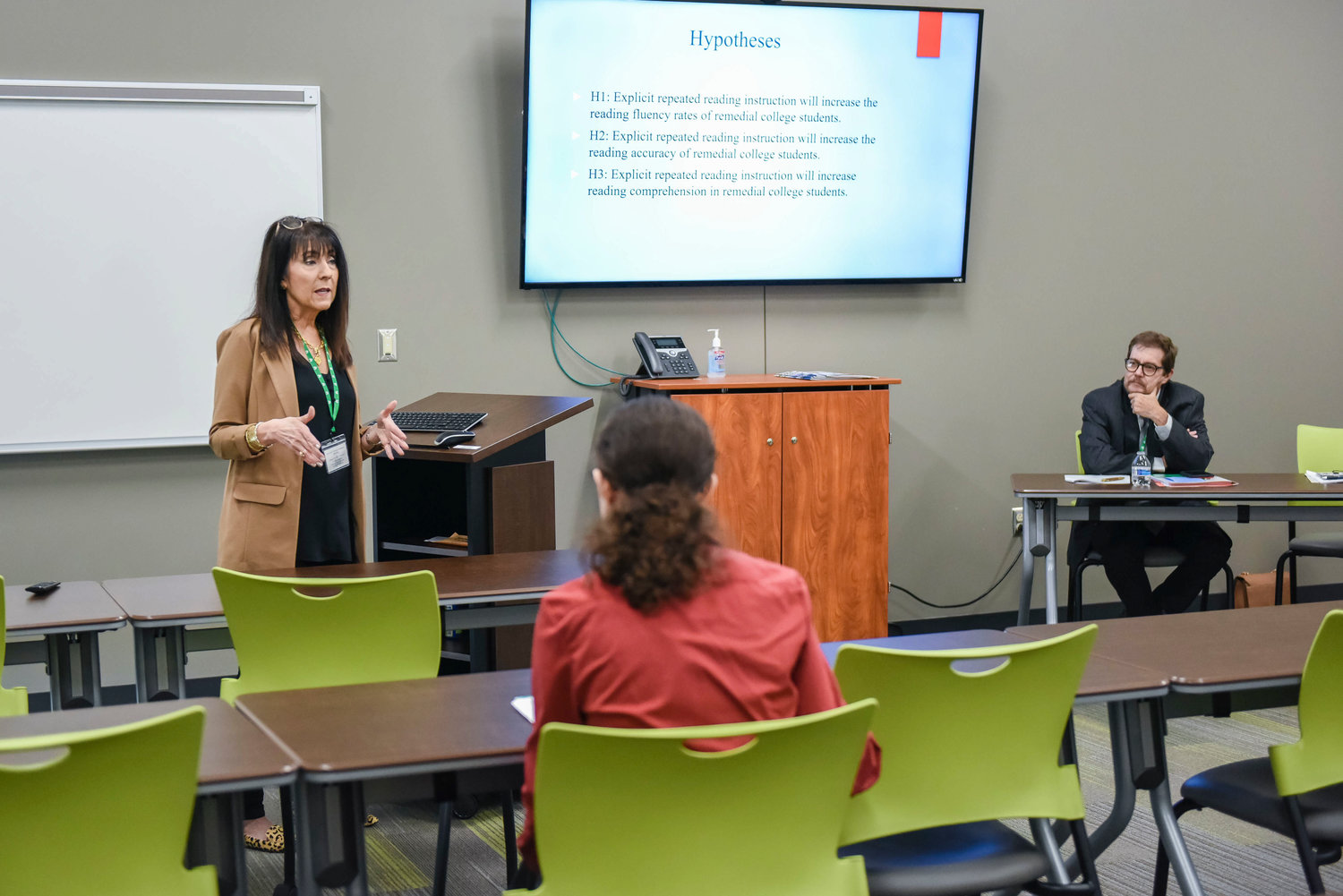 The Arkansas Philological Association (APA) held its 2022 annual conference at the University of Arkansas at Monticello on Thursday, October 27 through Saturday, October 29. Attendees included teachers and scholars who share an interest in words, languages, literature, criticism, film and teaching.

The nearly 70 conference presentations covered a variety of fields such as English, nursing, music, math and foreign languages, exploring diverse views of this year’s theme: Health is Wealth. More than 30 UAM faculty, staff and students presented at the conference and were joined by presenters from universities in Mississippi, Missouri, North Carolina and Oklahoma, as well as international participants from India and Kosovo.

Dr. Adam Long, president of APA and executive director of Arkansas Heritage Sites at Arkansas State University, thanked UAM for its role as conference host. “The annual Arkansas Philological Association Conference is a great opportunity for literature and language scholars from Arkansas and surrounding states to gather, collaborate and return to their classrooms with new ideas,” Dr. Long said. “This year we were very fortunate to be hosted by UAM, whose hospitality made the event memorable. We look forward to gathering again next fall in Little Rock.”

The conference’s keynote address, “The Law of Help: John Ruskin’s Moral Vision of Connection,” was delivered by Dr. Gabriel Meyer, the executive director of the Ruskin Art Club of Los Angeles, California. His talk focused on the importance of community service and commitment to sustain the vitality of community life. He is a poet-journalist and an award-winning foreign correspondent who has lived and worked throughout the Middle East, the Balkans and East Africa. He was especially acclaimed for his coverage of the first Palestinian Intifada and the Bosnian War and was awarded honorary doctorates in recognition of his work as a journalist by the Dominican School of Philosophy and Theology at UC Berkeley in 2017 and by Lancaster University in the UK in 2022.

Entertainment activities were open to the public throughout the conference. Drew County Extension Homemakers Council hosted the Inaugural Delta Quilt Show in the Gibson University Center on October 28 and 29, displaying over 100 Arkansas quilts. On October 28, Nick Newlin of 30 Minute Shakespeare led a “Let’s Make a Scene” dramatic reading of his condensed version of “Twelfth Night” and UAM’s jazz combo held a concert. On October 29, Michael Blazier, dean of UAM’s School of Forestry, Agriculture and Natural Resources, led an indoor nature walk.

Dr. Kay Walter, program chair of the 2022 APA conference and professor of English at UAM, stated, “The feedback I’m getting about the 2022 APA Conference is universally positive and covers a wide variety of aspects: individual presentations, the food, harmony within sessions, the quilt show, the indoor nature walk, the keynote address, the Shakespeare reading, the preprofessional presentations by undergraduates, the friendliness of our members and the UAM campus itself. In all, I think this was a successful building year for the Arkansas Philological Association, and I'm grateful for the part I played.”

For more information about the conference, please email the conference directors at apa2022monticello@gmail.com or call Dr. Kay Walter at 870-460-1578.