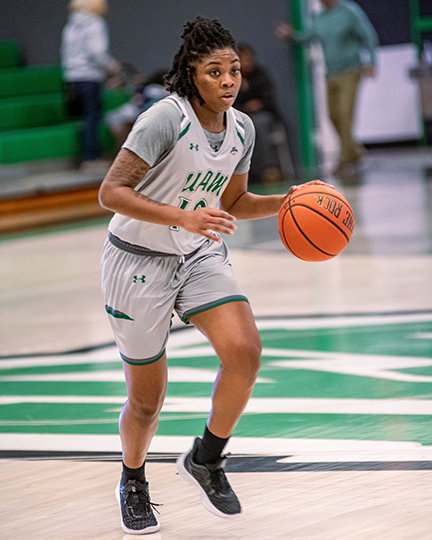 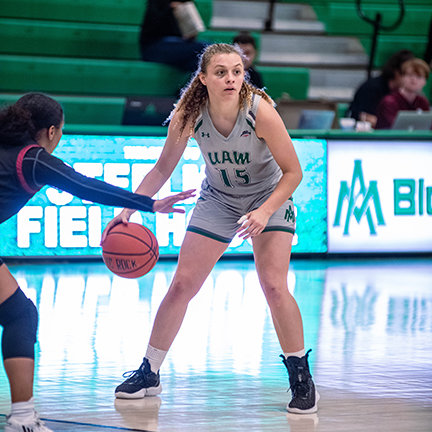 ALINDSEY LONG led the Blossoms in their second contest of their Oklahoma road trip with 18 points against Northwestern Oklahoma State.
Jeff Young
Previous Next
Posted Wednesday, January 11, 2023 10:30 am
Jeff Young

The University of Arkansas at Monticello Weevils and Blossoms took to the road this past week in the teams first road trip into Oklahoma of the season.

Facing Southwestern Oklahoma State University in Weatherford, Oklahoma on Thursday, January 5, in their first stop on the two game road trip, the Blossoms would take to the court with a 5:30 pm tip.

The Lady Bulldogs would get on the board first to begin the contest, scoring the first four points of the game before UAM got on the board on a jumper by Alindsey Long.

ABout two minutes would click past in the quarter before either team would score with the scoring drought being broken by Southwestern.

UAM’s Laia Balcells would tie the contest at six with 5:21 remaining in the quarter, but Southwestern would break the tie and go on to take a double-digit lead by the ending buzzer of the first quarter, 25-11.

Southwestern would increase their lead to 16 points to begin the second quarter, but the Blossoms would make a run to cout the lead to single digits with 5:35 remaining in the half on a jumper by Balcells.

A layup by Bailey Harris would cut the lead to eight points with 1:48 on the clock, but Southwestern would end the half leading by 10 points, 38-28.

The Blossoms would cut the lead to six points on two different occasions in the third quarter with Southwestern closing the quarter with a 14 point, 57-43, lead.

Southwestern would continue to lead throughout the fourth quarter with UAM getting within nine points twice before falling by a 10 point margin, 78-68.

Joi Montgomery would lead the Blossoms with 21 points with Bailey Harris scoring 11 points and Laia Balcells with eight.

In the second contest of the night, the UAM Weevils took the court to face the Bulldogs.

Southwestern would score the first five points of the first half before the Weevils would get a two-point basket from Mario Fantina.

The Weevils would gain the lead with 13:30 remaining in the half after a layup by Cole Anderson put the Weevils up one, 8-7.

The teams would go back and forth before Southwestern took the lead with 9:27 showing on the clock and would not relinquish the advantage for the remainder of the half, taking an eight point, 38-30, lead at the break.

Southwestern would maintain a double-digit lead for the remainder of the contest with the largest lead being 22 points with 16:35 remaining in the contest.

Southwestern would go on to defeat the Weevils by 13 points, 78-65.

Leading the way for the Weevils was Cole Anderson with 17 points followed by Timur Krupalija with 12 points.

Walter Covington and Issac Jackson rounded out the scoring with two points each.

Travelling to Alva, Oklahoma on Saturday, January 7, to face Northwestern Oklahoma State University, the Blossoms would fall behind 5-0 before Cyarah Kensmil got the Blossoms on the board with a pair of free throws and would tie the contest on a three by Laia Balcells.

The teams would exchange the lead throughout the first quarter with Northwestern ending the quarter with a two-point, 14-12 lead.

Northwestern continued to hold the lead until Balcells tied the contest at 20 with a freethrow.

The Blossoms would take the lead and hold a three-point, 25-22, lead at the half.

Northwestern would take the lead in the third quarter and would maintain the lead for the remainder of the contest, taking the 59-52 win.

Alindsey Long led the Blossoms with 18 points followed by Bailey Harris with 12 and Joi Montgomery with seven.

With the pair of losses, the Blossoms fall to 4-8 overall and 1-5 in Great American Conference play.

For the Weevils, UAM would start the contest with Northwestern scoring the first five points before Josh Denton got the Weevils on the board.

The contest would remain close throughout the first half with the game being tied at 37 after a layup by Denton.

Each team would exchange the lead throughout the second half until 4:11 remained in the contest when Northwestern would take the lead for the final time in the contest, going on to hand the Weevils an eight-point, 82-74, victory.

The Weevils would have four players score in double-digits with Josh Denton leading the way with 21 points.

Edwin Louis would add 14 points followed by Issac Jackson and Timur Krupalija each scoring 10 points each.

Mario Fantina scored nine points with Cole Anderson and Donovan Cooper rounding out the scoring with five points each.

With the losses, the Weevils fall to 5-7 overall and 1-5 in conference play.

The Weevils and Blossoms will return home to Steelman Fieldhouse this week for a pair of Great American Conference contests.

First on Thursday, January 12, the Blossoms will take the court to face Southeastern Oklahoma State University with a 5:30 pm tip scheduled with the Weevils taking the court shortly after.

Returning on Saturday, January 14, the Blossoms will tip off at 1 pm facing East Central University with the Weevils to take the court against the Tigers following the Cotton Blossoms contest with the Lady Tigers.