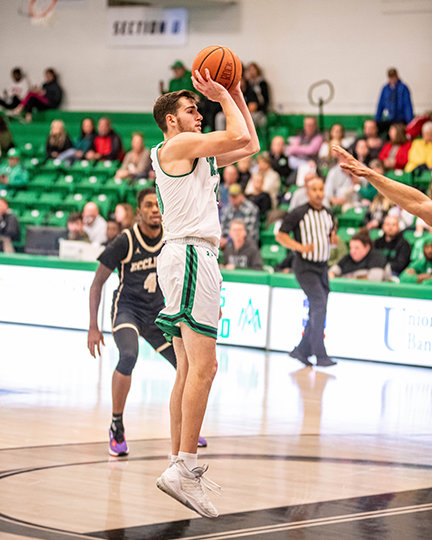 JOSH DENTON led the Weevils in scoring against Ecclesia College with 15 points connecting on four of six from the three-point arc.
Jeff Young 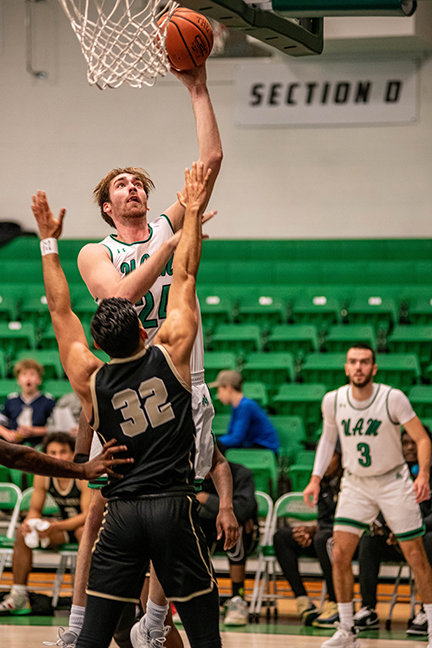 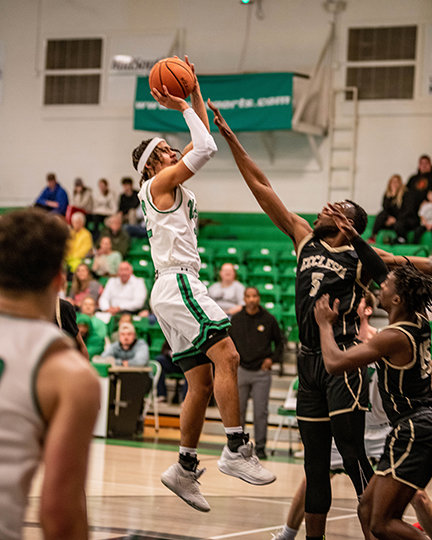 The University of Arkansas at Monticello Boll Weevils picked up their first win of the 2022-23 Basketball Season with a 79-43 victory over Ecclesia College on Thursday, November 17, at Steelman Fieldhouse.

UAM had four players score in the victory over Ecclesia.

Coming into the contest, the Weevils had competed in two contests, travelling to Kansas City, Missouri to participate in the Central Region Challenge.

In the first match-up of the Challenge, the Weevils would face #18 ranked Augustana University.

UAM and Augustana exchanged the lead several times during the first half of play with Augustana taking the lead with around a minute remaining in the half to take a 39-36 lead at the break.

The game would remain close in the second half with UAM taking a seven point, 64-57, lead with 5:28 remaining in the contest.

Augustana would tie the contest at 65 with 1:32 remaining.

UAM’s Edwin Lewis would lay the ball in with 17 seconds left in the contest to take a 67-65 lead, but Augustana would draw a foul on their next possession to go to the freethrow line for two shots.

Caden Hinker would connect on the first shot to pull within one point 67-66, but would miss on the second attempt, however, Augustana’s Issac Fink would get the rebound off the bounce and connect on a jumper that would make the Top 10 Plays on ESPN as time expired giving Augustana the 68-67 victory.

Mario Fantina led the Weevils in scoring with 17. Issac Jackson and Edwin Lewis scored 13, with Timur Krupalija being the fourth Weevil to score in double-digits with 12.

Alex Brogdon scored seven with Josh Denton rounding out the scoring with five.

UAM returned on Saturday, November 12, for the second contest of the challenge, dropping a 92-60 contest to St. Cloud State University.

UAM had five players score in double-digits in the loss, with Josh Denton scoring 12 points, Edwin Louis and Timour Krupalija with 11, and Mario Fantina and Cole Anderson with 10. Issac Jackson had five points with Alex Brgdon rounding out the scoring with one point.

In their first contest at Steelman Fieldhouse, the Weevils would allow Ecclesia College to get the first two points of the contest with 19:18 on the clock, but Mario Fantina would connect on a three-pointer to give the Weevils the lead in which they would not relinquish for the remainder of the contest.

The Weevils lead would reach double-digits with 9:41 remaining in the half after Alex Brogdon connected on a three to increase the Weevils’ lead to 12 points, 23-11.

The Weevil’s biggest lead of the half would be 22 points which was reached twice in the half.

The Weevils continued to lead by double-digits throughout the second half, with the biggest lead of the contest coming  on the last score of the game on a freethrow by Donovan Cooper to give the Weevils a 36-point, 79-43. margin.

Josh Denton led the way with 15 points followed by Cole Anderson with 14, Issac Jackson with 13, and Alex Brogdon with 11.

Mario Fantina and Edwin Louis each had nine, Timur Krupalija with seven and Dovovan Cooper rounding out the scoring with one point in the 79-43 victory.