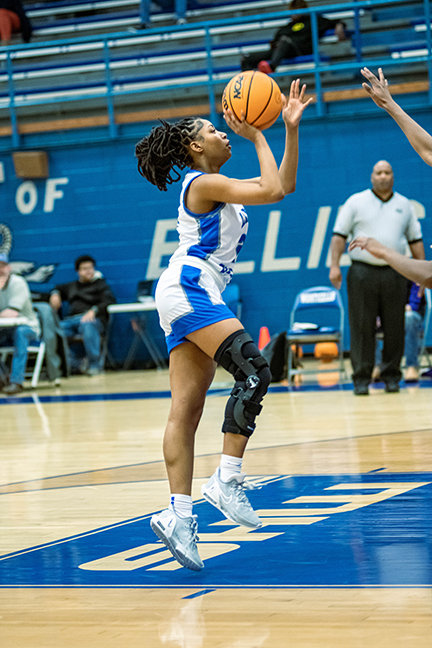 AUNESTI JACKSON drives the lane against Hamburg on Tuesday night. Jackson would not score against Hamburg, but was second in scoring against Warren with 14 points.
Jeff Young 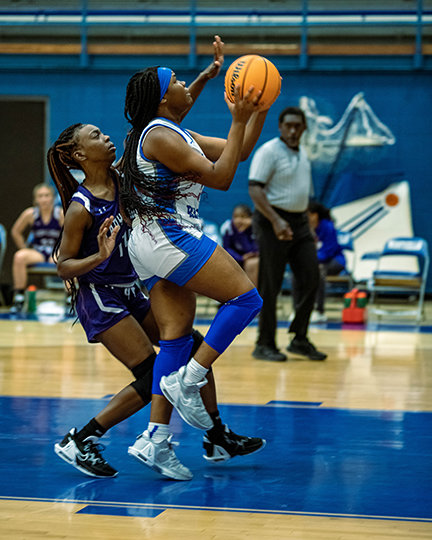 GENESIS FREEMAN (left) led the Lady Billies in scoring against Warren with 18 points and against Hamburg with 10 points.
Jeff Young 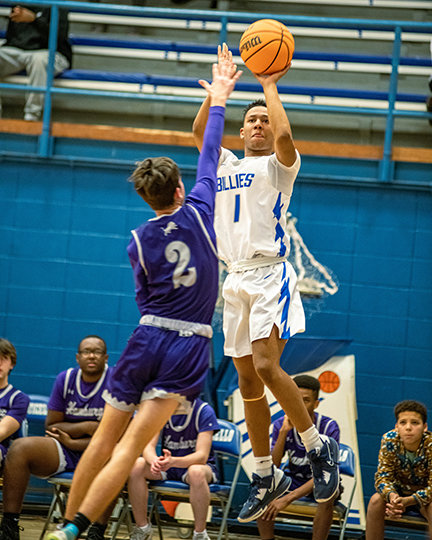 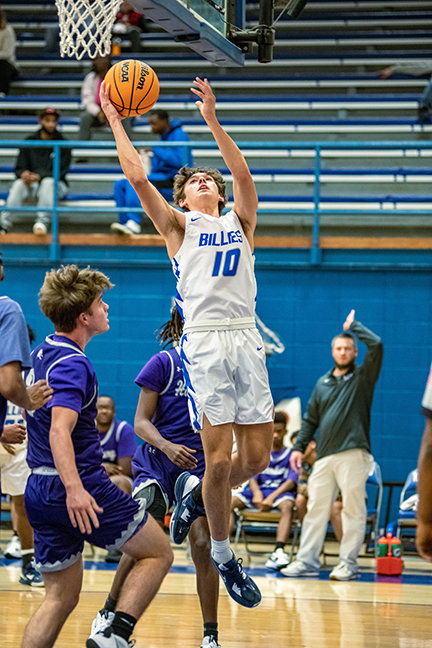 LUKE JONES (right) drives the lane against Hamburg. Jones would lead the Billies in scoring with 23 points to help Monticello improve to 3-0 in conference play.
Jeff Young
Previous Next
Posted Wednesday, January 11, 2023 10:00 am
Jeff Young

The Monticello and Lady Billies began the 8-4A Conference portion of their basketball schedule with home victories over Warren.

Scheduled to be played on the road at Warren, the game was moved to Monticello with the future contest with Warren being moved to Warren in hopes of being played in their new arena.

Taking the court first, the Monticello Lady Billies would hold the Lady Jacks to two first quarter points, outscoring Warren 14-2 in the quarter. ‘

A more competitive quarter in the second stanza as Monticello would outscore Warren 7-5 to take a 21-7 lead at the break.

Returning from halftime, the Lady Billies would produce one of their best single quarter performances of the season, outscoring Warren 22-6 in the third quarter to hold a 43-13 lead heading into the fourth quarter under the “Sportsmanship Rule” with a running clock.

In the fourth, the Lady Billie defense would hold the Lady Jacks to zero points while scoring seven to finish the contest with a 50-13 win earning their first win of the season.

Leading the way for the Lady Billies was Genesis Freeman with 18 points followed by Aunesti Jackson with 14.

For the Billies, the Warren Lumberjacks would get out to a 14-5 lead in the first quarter, but the Billies would come back in the second quarter to outscore Warren 17-8  to head into the locker room tied at 22.

The Billies would return from the break to hold the Lumberjacks to four third quarter points, outscoring Warren 14-4 to hold a 10-point, 36-26, lead heading into the fourth quarter.

Warren would make a run in the fourth quarter, outscoring Monticello 18-12 in the quarter, but Monticello was able to hold Warren at bay taking a four-point, 48-44, victory for their first conference win of the season.

Jacorius Ridgell would lead the Billies in scoring with 11 points followed by nine point outings by Luke Jones and Jeremiah Daniels.

Quay Rhodes would add seven, Tejon Tensley with four, Jon Lambert and Jagger Hines with three, and Jemar Matthews rounding out the scoring with two.

On Friday, January 6, Monticello would travel to Star City to face the Lady Bulldogs and Bulldogs.

For the Lady Billies, Star City would defeat Monticello 72-21, but the Billies would improve to 2-0 in conference play with a 64-55 win over the Bulldogs.

Returning home to Dan Coston Fieldhouse on the campus of Monticello High School on Tuesday, January 10, the Monticello teams would host the Hamburg Lions.

The Lady Billies and Lady Lions would compete in a competitive first quarter with Hamburg leading 14-10 after the quarter.

The Lady Lions would outscore Monticello 12-7 in the second quarter to hold a 26-17 lead heading into the half.

Hamburg would take full control of the contest in the second half with the Lady Lions outscoring Monticello 15-6 in the third, and 14-1 in the fourth to take a 55-24 victory.

For the Billies, Monticello would score the first four points of the contest, but Hamburg would come back to outscore Monticello 14-12 in the first quarter.

Monticello would comeback to outscore Hamburg 16-10 to tie the contest at 42 heading into the fourth quarter.

Hamburg would score the first points of the final quarter before Monticello went on a 16-0 run before the next Hamburg score.

Monticello would go on to outscore Hamburg 23-6 in the quarter to take the 65-48 win.

Monticello will return home on Friday, January 13, hosting Watson Chapel with the Lady Billies tipping off at 5:30.

The Billies will be on the road on Tuesday, January 17, travelling to Crossett to face the Eagles. The Lady Billies begin at 5:30 pm.